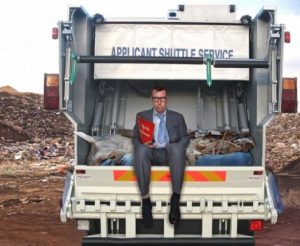 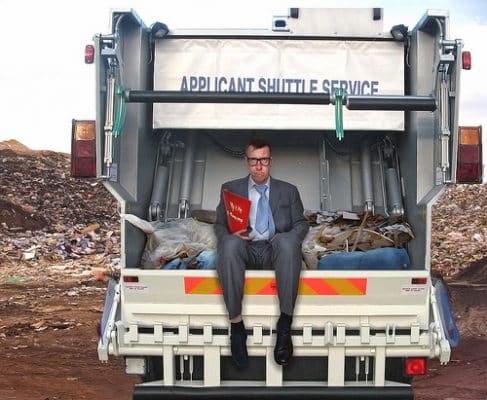 Written by Sara McCord at The Muse

Nervousness goes with interviewing like scrambled eggs goes with hash browns. You pretty much always find them together.

In other words, everyone I know—myself included—walks out of the conversation feeling a little iffy. Even if, on one level, you know you did a great job; there’s another part of you that’s questioning if you used that industry phrase correctly.

But, as the saying goes, we’re our own toughest critics. And while reflecting and looking for areas for improvement can be worthwhile, beating yourself up over a comparatively small interview mistake is a waste of time.

I’ve interviewed hundreds of candidates, and it’s true: The very best job applicants stood out, and I still remember them to this day. But, to be honest, I didn’t then (nor do I now) obsess over someone giving an answer or two that was “just OK.” I understood that it was an awkward situation, and sometimes, people needed to find their footing.

Now, with all of that said, there were also some answers that were shockingly, unforgivably bad. I like to think you already know not to say any of these things, and so, the point is for you to feel reassured that you steered clear of the memorable-for-the-wrong-reasons answers.

But if you happen to see yourself in any of the answers below, change it ASAP!

1. They Told Me They Never Got Something Wrong (Ever)

I’m a big fan of the classic: “Tell me about a time you failed.” In fact, I was most likely to ask it of very impressive candidates. That’s because if someone’s used to getting things right, I also want insight into how they’ll respond when things go wrong.

Well, to this day I still remember the person who could not think of one time—ever, in his entire life—that he’d failed. We sat there in silence, as he looked at me. I asked if, maybe he’d ever missed a deadline, taken a risk that hadn’t paid off, gotten a bad grade on a paper, missed making a sports team … anything. And his answer was no, he couldn’t think of a time he’d ever been anything but successful.

As far as my follow-up question, he’d also never once had to ask anyone for help.

Clearly, his goal was to put his best foot forward as someone who could be counted on to get things right. However, this lack of an answer is the worst response I’ve ever heard to this question.

I couldn’t move him forward in the process because one of two things was true: Either he really never had failed (in which case, who knows how he’d cope if he did in a new role), or more likely, he had at some point like everyone else, but he didn’t have the self-awareness to know or the self-confidence to know it didn’t define him.

(If you’re wondering, here’s a four-step plan to answering the question correctly.)

Telling the hiring manager that you've never failed at anything shows lack of self-awareness.

2. They Said Something Inappropriate

Have you ever heard the rule that you shouldn’t post anything on social media—unless you’d be OK with your boss and grandmother reading it? The same goes for interviews.

More than one candidate referred to people of a different race, gender, or background, in an offensive way or using inappropriate language, and they were all disqualified.

I think these applicants thought it would be OK, because they weren’t using the specific words that would get someone fired on the spot. But to be clear, no matter how casual the environment might be, or how comfortable you feel, do not say anything offensive or vulgar (even as a joke).

You’re signing up to represent their company, and they aren’t going to want someone who uses that language to speak for them. Plus, you run the risk of offending the person speaking to you.

3. They Acted Like They Were Better Than Everyone Else

One candidate rubbed me the wrong way, because though he was well-qualified, he was very pompous. In nearly every answer, he spoke poorly of others to lift himself up by comparison. This included other applicants as well the people he’d have been charged with helping in his role.

He acted like he had the role in the bag: not in a confident, I earned this way; but with an You’d be an idiot not to hire me kind of arrogance. (If you struggle with this, here are great tips on looking confident, not cocky.)

I knew we’d made the right choice to pass him over when, afterwards, he came to our office demanding an explanation. He asserted: “I know for a fact I should’ve moved forward ahead of other people you chose.” This proved my point: Because he didn’t get his way, the only conclusion he could draw was that I must not be good at my job (and he wanted to tell me so). Clearly, not the kind of person people will line up to work with!

I don’t know if you’ve spotted it, but there’s one other thing all of these candidates had in common. They were all certain they were 100 percent in the right with their answers. So, the very fact that you’re reading an article about interview nerves and mistakes shows that you’re someone who reflects and cares.

And that right there tells me your interview went better than you think.

3 Interview Mistakes You Probably Can’t Recover From originally appeared on The Muse.

Ever made a fatal mistake in a job interview? We want to hear your story! Tell us your thoughts in the comments or join the conversation on Twitter.