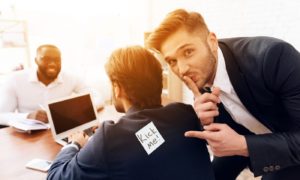 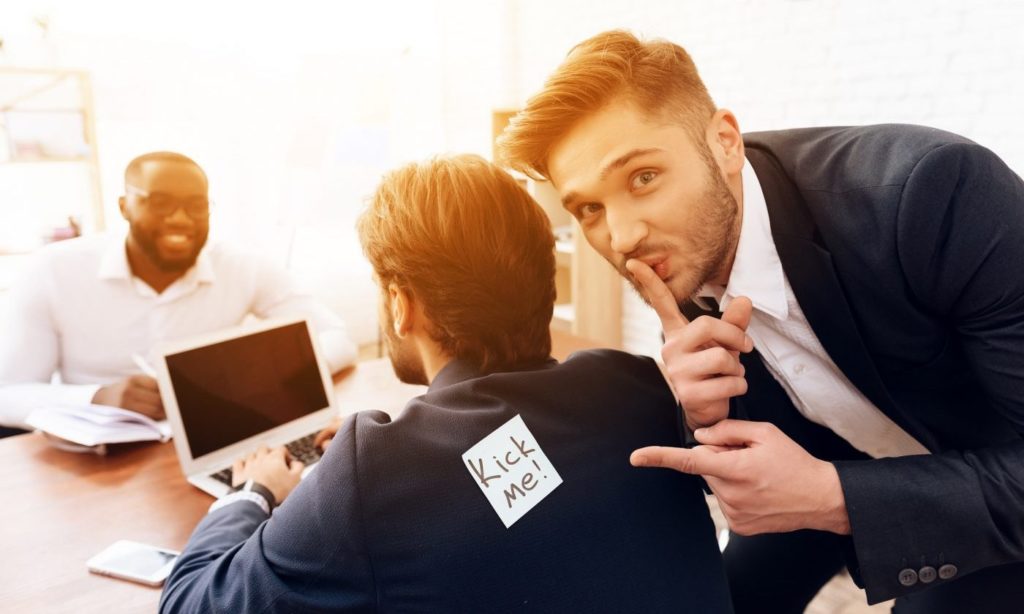 You spend a lot of time with your coworkers. If you’re lucky, some of them may even become friends. But even if work comes to feel like a second home, it’s not a good idea to get too comfy. Some things are just not a good fit for the workplace. Among them: many office April Fools’ Day pranks.

Think we’re being party poopers? Consider this: humor is highly subjective. One person’s laugh riot is someone else’s shrug emoji. Pranks are especially fraught, since they depend on, well, fooling people — and many people just don’t like to be fooled.

If your April Fools’ Day prank lands the wrong way, you could have hurt feelings instead of team-building hilarity. You might even get fired, as these unfortunate employees discovered.

1. A Volcano in Massachusetts? Sure, Why Not

Remember those stories about the panic that allegedly ensued in the 1930s after Orson Welles’ “War of the Worlds” broadcast? Supposedly, listeners believed that the radio drama was a real news bulletin … and that aliens had invaded New Jersey.

Forty-plus years later, a TV producer in Boston rediscovered that a panicked audience won’t stick around for a clarification.

Per The Christian Science Monitor:

[The producer] was fired by officials at WNAC-TV, RKO, for “his failure to exercise good news judgment” and for violation of Federal Communications Commission rules.

On Tuesday, April 1, the station ran a bulletin that the nonvolcanic Great Blue Hill in suburban Milton, Mass., had begun spitting flames and lava. Films of the active Mt. St. Helens volcano in Washington State were used, dubbed with warnings from President Carter.

The station ended the segment with a card reading, “April Fool,” but it was too late. People watching the program lit up their local police’s phone lines, asking if they needed to evacuate. (h/t: Vox.)

Sometimes, you don’t even have to be the pranker to lose your job. An April Fools’ Day prank gone wrong can wind up costing an innocent bystander their employment.

In 2016, Google’s annual April Fools’ Day prank was Mic Drop, which a yellow Minion dropping a microphone. By enabling the feature, users muted their email conversation and inserted a GIF of a mic-dropping minion.

Unfortunately, thanks to a bug, not every user realized they’d enabled the feature … and not every recipient enjoyed the snarky reply.

Thanks to Mic Drop I just lost my job. I am a writer and had a deadline to meet. I sent my articles to my boss and never heard back from her. I inadvertently sent the email using the “Mic Drop” send button.There were corrections that needed to be made on my articles and I never received her replies. My boss took offense to the Mic Drop animation and assumed that I didn’t reply to her because I thought her input was petty (hence the Mic Drop). I just woke up to a very angry voicemail from her which is how I found out about this “hilarious” prank.

Several other users reported problems, causing Google to hurriedly discontinue the feature and post an apology in their product forum, saying in part:

Well, it looks like we pranked ourselves this year. ? Due to a bug, the Mic Drop feature inadvertently caused more headaches than laughs. We’re truly sorry. The feature has been turned off. If you are still seeing it, please reload your Gmail page.

This one may not have lead to the prank player losing their job … but it certainly didn’t help them around the office.

At Ask a Manager, a reader writes to blogger Alison Green to describe the following situation:

I may have put myself unintentionally on the bad side of a few of my coworkers, as well as possibly my supervisor. Just recently was April 1st, and for some humor (or so I thought), I figured I’d pull a prank by announcing on Facebook that I have taken a new job. Since it was April 1st, I thought that everyone would get it right away. I thought wrong.

The question: could this backfire on the prankster, given that they had coworkers as friends on Facebook.

The answer: of course. Green’s advice might help the reader minimize the damage, but it doesn’t change the fact that social media pranks like these are almost always ill-advised. In cyberspace, no one can see you wink.

Should You Play That April Fools’ Prank at Work?

So, when should you play pranks at work on April Fools’ Day? Short answer: probably never. A survey from The Creative Group found that only 3 percent of bosses found office April Fools’ Day pranks “very appropriate,” according to USA Today.

“I don’t see a place for April Fools’ pranks in the workplace. It’s counter to professionalism,” said career blogger Kenna Griffin, speaking with USA Today. “The payoff of the joke is not great enough for the potential consequence: putting future employment at risk, offending a boss or losing a positive reference.”

And Microsoft marketing chief Chris Capossela issued an internal memo warning employees against pranks, especially those that target the public:

…data tells us these stunts have limited positive impact and can actually result in unwanted news cycles. …I appreciate that people may have devoted time and resources to these activities, but I believe we have more to lose than gain by attempting to be funny on this one day. (h/t: The Verge)

Maybe you’re not working at a tech giant and there’s zero chance that your prank will make the news. It’s still a big risk. You’re depending on your coworkers – every single one of your coworkers – to get the joke and take it the right way. That’s pretty unlikely to work out.

But if you’re feeling confident that your colleagues will get the joke and you absolutely can’t get through the day without a laugh or two, observe these rules:

Make Sure No One Winds Up Feeling Like a Fool

Workplaces can get clique-y. Pulling April Fools’ Day pranks on just a few coworkers — or worse, on just one coworker — will only make that situation more intense. Whenever you play a joke that makes some people the target and allows other people to laugh at their expense, you’re not helping office morale.

Obviously, you want to avoid anything that makes people uncomfortable or that involves discrimination, harassment or other abusive behavior. But think beyond what’s legally prohibited here. If your prank is likely to make someone feel targeted, especially based on things beyond their control, it’s not funny.

That means not just taking into account legally protected characteristics like race, ethnicity, religion, age, etc. It means making certain that you’re not causing your teammate to feel like an outsider.

Remember That You’re at Work to Work

If your prank distracts people from their work or otherwise negatively affects productivity, don’t do it. It can be hard to balance the social aspect of working with a bunch of people with keeping your eyes on your goals. But team-building stops when time-wasting becomes a problem. If you’re keeping people from getting their work done — especially if they have tight deadlines and/or a long to-do list — you’re creating a distraction, not bringing people together.

Also, consider how much of your own time an April Fools’ Day prank might take to pull off. Do you really have an extra hour or two to wrap your boss’s cubicle in plastic wrap or fill your teammate’s car with balloons? Especially if your plans require burning work hours, think before you commit. Even the most lighthearted boss is likely to reconsider your workload if you’re doing arts and crafts project during business hours.

It’s probably a bad idea to prank the boss, unless you’re sure they’ll get the joke. (If they don’t, you could lose your job or at least have a few scary days around the office.) But it’s definitely not a good idea to prank your direct reports or anyone else you have power over.

We hope this goes without saying, but it’s never funny to joke about people losing their job or benefits or taking a pay cut. The economy might be good right now, but that hasn’t always been the case. About one-fifth of U.S. workers lost their jobs in the years following the last recession, according to a survey from Rutgers University. Real wages are still worth 9 percent less than in 2006, per The PayScale Index. So, for many, job security and wage growth aren’t something to laugh about.

Plus, that’s the sort of joke that never tickles HR’s funny bone. They’re trying to attract quality new hires to your organization. That’s hard to do if your company gets a reputation for bullying.

Have you ever gotten in trouble at work for an April Fools’ Day prank? We want to hear from you. Share you story in the comments or join the conversation on Twitter.