Salaries Behind the Scenes at the Academy AwardsR

The most glamourous night in Hollywood has nearly arrived. The Academy AwardsR will broadcast live from Los Angeles on February 26th. Amid chatter from entertainment world leaders, movie fans are debating their favorite nominees online. Even PayScale has been swept up in the excitement, offering our second annual "Behind the Scenes at the Academy Awards" salary data graphic.

With only 10 days left until the OscarsR begin, the buzz is growing. Longtime jeweler to the stars, Tiffany & Co., announced today that celebtity stylist and reality TV starlet, Rachel Zoe, has designed five new window displays  at Tiffany stores around the world. Each one will highlight a different decade of Hollywood style in honor of the OscarsR and, of course, feature Tiffany jewlelry in the style of the era.

While we may not have millions of dollars in diamonds to add to the excitement, we do know who may be making millions, or not, the night of the event. For the second year in a row, we’ve researched top, L.A. salaries for the people who run cameras, edit video, make sure the on-stage entrances happen right on time and sweep the theater. None of their salaries top Angelina Jolie’s estimated $2.5 million for her role in “In the Land of Milk and Honey,” but they do help the OscarsR sparkle and shine.

See our “Academy AwardsR Behind the Scenes” graphic for a review of the glamorous and not-so-glamorous gigs at OscarsR. 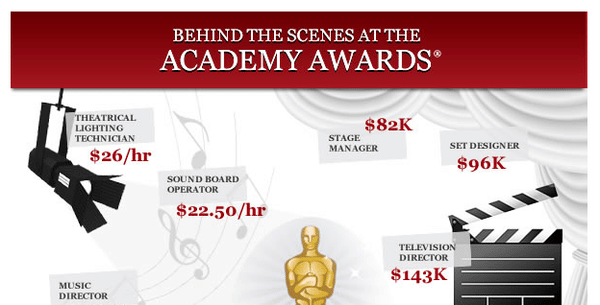 Romantic Jobs that “Set the Mood”

5 Must-Dos for Your Personal Brand on LinkedIn