With most of us spending at least 40 hours per week at work, it may feel like you see your co-workers more than your family or friends. And, what happens when you see someone all the time? They start to get on your nerves. So, it's only natural to occasionally get annoyed by the people you work with. (They probably think you're annoying, too.) But, what stand out as the most annoying work habits?

In a recent survey conducted by Yahoo Shine! and Fitness Magazine, 2,000 workers were asked what annoys them most about their co-workers. For men (41 percent), body odor tops the list. Women (41 percent), however, are most annoyed when a co-worker steals credit for their ideas. Another complaint that ranks highly (33% of women and 31% of men) is having to listen to a co-worker’s personal phone conversation.

My personal pet peeve is when someone leaves their cell phone volume on high and then walks away so that you are forced to listen to whatever obnoxious ringtone they’ve downloaded recently.

For some people at PayScale, the worst co-worker offense is leaving dirty dishes in the sink. This sign hangs over our communal kitchen sink at PayScale’s office.

What annoys you most about your co-workers? Let us know in the comments section. 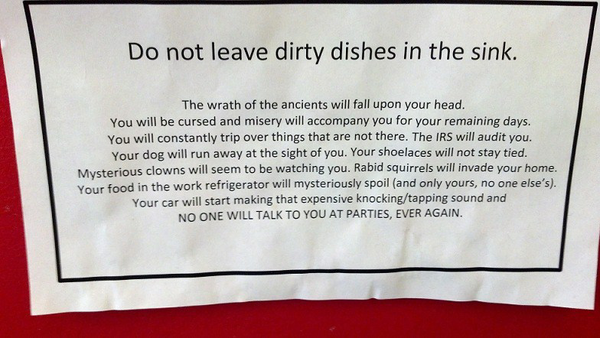