Do Jerks Get Ahead?

Recently, Forbes.com ran two columns on the relationship between success in business and being an aggressive, thoughtless person — in other words, a giant jerk. David DiSalvo argued that jerks get ahead, because of their perceived social status. His colleague Deborah L. Jacobs offered a rebuttal, saying that jerks do not get ahead, because their boost in social status doesn't last. Who is right?

Let's look at the villains first, because they're always more interesting. And that's pretty much DiSalvo's point: Jerks are overconfident people who force others to put them on a pedestal, which translates to increased social status — and social status, he points out, is golden.

Even rudeness, which seems like it would translate into career suicide instead of success, can be beneficial, at least to the jerk in question. DiSalvo mentions a study published in the journal Social Psychological and Personality Science that shows that the ruder people act, the more powerful they appear to observers. They're perceived as people who don't have to follow the same rules as everyone else.

Jacobs' take on all of this is that jerks do experience a slight boost in social status, but not a lasting one. She says that the temporary power of rude, overconfident people is simply an extension of the psychological phenomenon in which people in groups tend to behave just as badly as the lowest common denominator — as long as they're in that group. Later, when they have perspective, they might shake their heads and wonder how they ever could have gone along with everyone.

"It isn't that we are a different person — just that the situation we are in has changed," she writes. "That's true for jerks too. Whatever status they achieve with their actions is fleeting. Violating protocols and rules is not a sign of power but of an egoist. We appreciate what FORBES contributor David DiSalvo, calls the 'charisma of villainy' at the time, but it is not sustainable and not healthy."

She cites books like "Good to Great: Why Some Companies Make the Leap … and Others Don't" and "The New Psychology of Leadership," both of which say that the success of a company is dependent on the behaviors modeled by its leader. Ideally, that should include listening to others, understanding, and not taking credit for other people's work.

"In other words, just the opposite of a jerk," Jacobs says.

In the end, it seems, jerks might succeed on a smaller level, but probably won't achieve greatness on the strength of their jerky behavior. So they might highjack the lunch order at your next meeting, but they probably won't do it from the head of the conference table.

A Look at Gen Y in the Workplace [infographic] 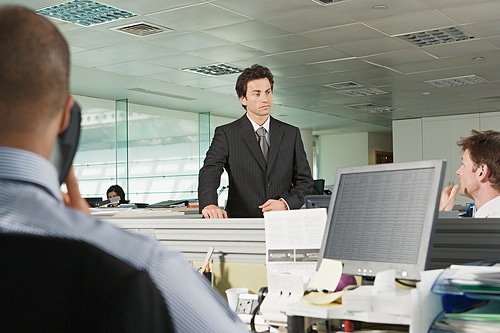