The Dangers of Eating at Your Desk

How often do you find yourself eating at your desk? A poll by the American Dietetic Association and ConAgra Foods Foundation found that 70 percent of us eat at our desks several times a week. At PayScale, we conducted our own Facebook poll and found that 53 percent of respondents ate lunch at their desks as opposed to anywhere else. What implications does this practice have on health and productivity?

Germaphobes, avert your eyes for a moment. The average worker’s desk has bacteria that’s 400 times more dangerous than most toilet seats in public bathrooms. “People turn their desks into bacteria cafeterias because they eat at them, but they never clean them,” said Charles Gerba, Ph.D., to WebMD. “The phone is the dirtiest, the desktop is next, and the mouse and computer follow.”

Eating at your desk poses additional health issues. Because you’re more likely to multitask while noshing, chances are good that your portion control will suffer. What’s more, you’re depriving yourself of the chance to get up, walk around, move your legs and creatively recharge — all things that can boost brainpower and productivity. We’ve written extensively about the pitfalls of sitting and sedentary work; to catch up, head here, here and here.

If you must eat at your desk, be sure to disinfect it regularly and use a placemat. Pay attention to the act of eating; avoid multitasking and doing work while eating. Look for ways to get active as often as possible, whether that means using the farthest bathroom from your desk or hitting the gym before work.

Why the 40-Hour Workweek Needs to Make a Comeback [infographic]
Email Eats Up 28 Percent of the Workday
What Are the Country’s Most Thankless Jobs? [infographic] 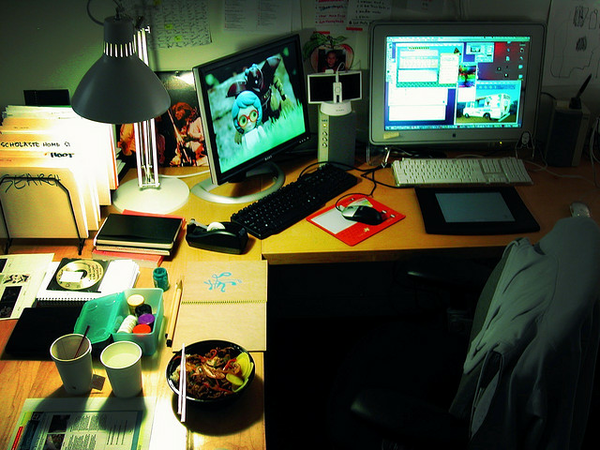