The immigration debate has been an ongoing political and social boiling point. A new study, transformed into the following infographic by The Huffington Post, suggests that there could be an economic benefit that would outweigh the costs of immigration reform.

Some states have adopted tougher immigration policies in an effort to curb the presence of illegal aliens. However, there’s another side to the debate that suggests the U.S. could lose as much as $2.3 billion in federal tax revenue over the next 10 years after failing to pass the 2010 DREAM Act, which would have granted legal status to 2.1 million young immigrants. On the other side, what it would cost to implement the DREAM Act is estimated to be $1.1 billion.

There are also costs associated with passing reform. It’s estimated that $54 billion was saved to Medicare, Medicaid and Social Security by avoiding the passage of the 2006 comprehensive immigration reform proposal. However, $66 billion would have been made in federal tax revenue if that same act would have passed.

Check out the infographic below for more revelations on the possible economic benefits of immigration reform.

Learn to Keep Your Clients Happy From the Restaurant Industry

Learn How To Get More Retweets [infographic] 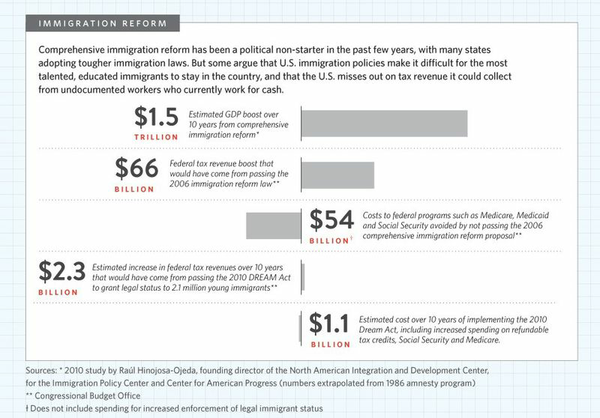