PayScale Predicts the 2020 Election Will be Closer Than Polls Indicate

If we learned anything in 2016, it is that the polls don’t always get election results right, especially when it comes to distinguishing between the popular vote and the Electoral College, which is what will actually determine the next President of the United States in the upcoming 2020 Election.

In order to predict the 2020 Election, PayScale surveyed people who recently filled out a salary profile on how they plan to vote. PayScale collected profiles from 10,668 American respondents between August 27, 2020 and October 1, 2020. Respondents reported information about their education, job, and total cash compensation, as well as demographic information. PayScale then used this data to predict not only who would win the 2020 Election, but also which candidate is favored to win by voter age, education, gender, race, occupation, industry and income (compensation).

Note: Readers are encouraged to share PayScale’s 2020 Election data in social media, including reposting the cards below. Please use the hashtag #PayScaleElection20 and if you want to be acknowledged in our social channels.

Across 5,000 simulations of the 2020 Election, Biden wins 51.6 percent of the time, Trump wins 45.6 percent and there is a tie 2.8 percent of the time. The average outcome across all 5,000 simulations shows Biden winning the electoral college, but only by two points, for a final outcome of 270 to 268 electoral votes, which is the bare minimum required to win the 2020 Election. 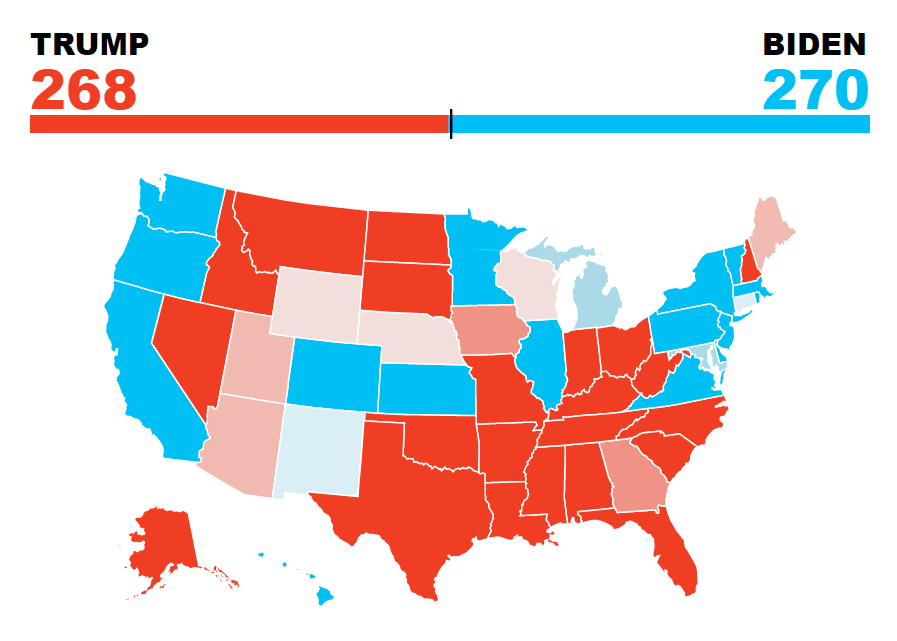 PayScale’s data predicts that many swing states will go red in the 2020 Election, including Iowa, Ohio, North Carolina and Florida. Pennsylvania and Michigan, which voted Republican in 2016, are predicted to go to the Democratic candidate this year and were critical to lock a Biden win in many simulations. However, Michigan is still showing as a swing state, along with Wisconsin, Arizona, Wyoming, Nebraska, Utah, and New Mexico, and to lesser extent, Georgia and Maine.

Surprisingly, Kansas is showing to be going blue in the 2020 Election. This may be a factor of PayScale’s data being more skewed toward educated voters in urban areas who are more likely to fill out salary profiles. Although PayScale’s data science team weighted the data so that the demographics (age, sex, and educational attainment) would more closely represent the demographics of national registered voters, the weighting may not have been sufficient to adjust to the education level in the state of Kansas. Then again, Kansas may go blue because sentiment toward President Trump has changed in Kansas. If Kansas goes Blue in 2020, it will be the first time since 1964.

Given the contentious nature of the 2020 Election and President Donald Trump’s repeated assertions that he won’t accept the election results if he loses, ostensibly due to distrust of mail-in voting, a close race in the Electoral College could create contention and potentially force the election to be settled by the Supreme Court. 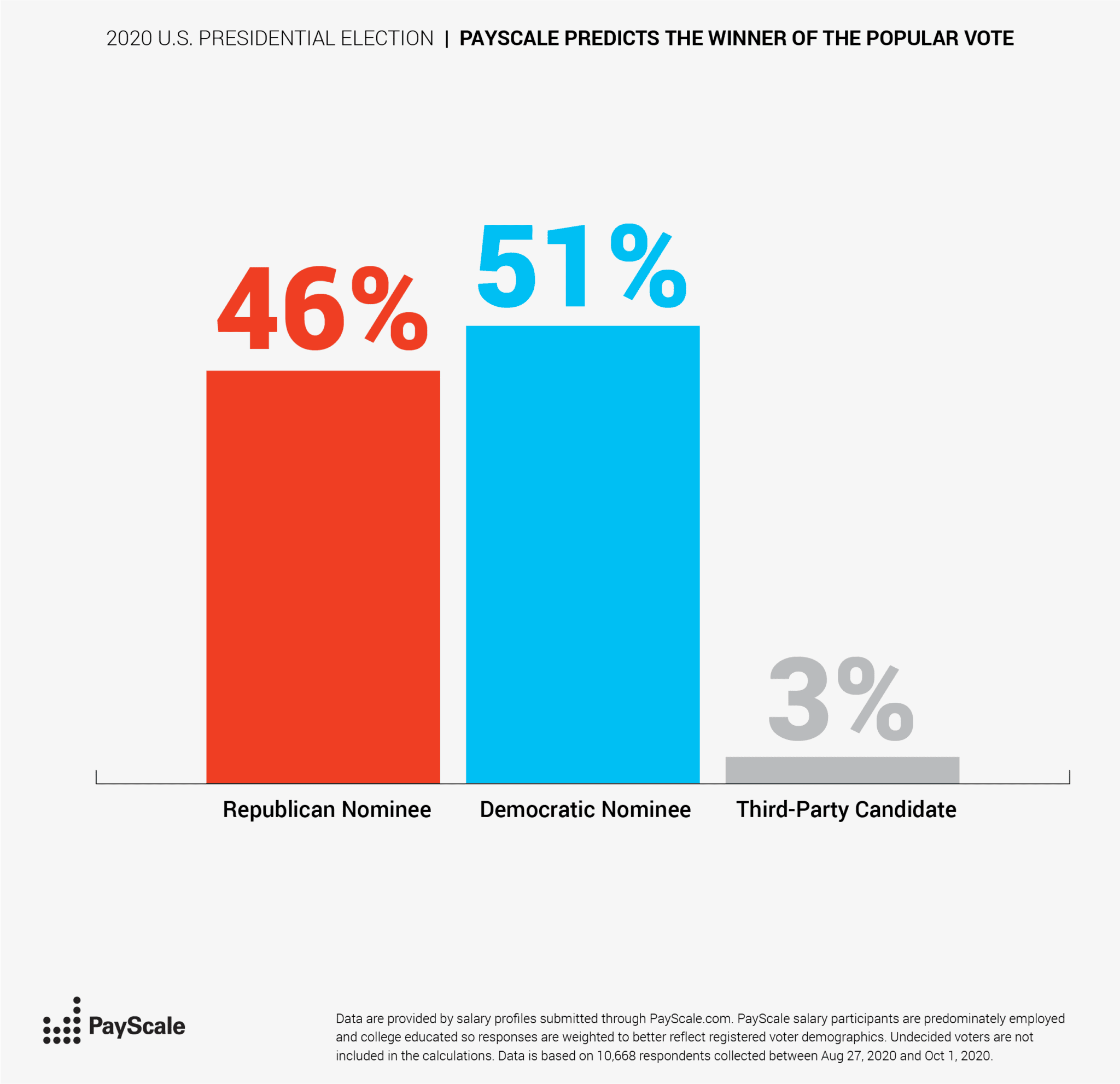 Trump is Favored by Working Class Voters in the 2020 Election

In the aftermath of 2016, many speculated why the Democratic candidate Hillary Clinton lost to Republican candidate Donald Trump. One of the hypotheses at the time was that Hillary Clinton failed to win over the working class, or blue-collar workers, especially in rural states. If that is true, then the Democrats are in trouble. PayScale’s data shows that blue-collar workers are still in favor of Donald Trump in 2020. 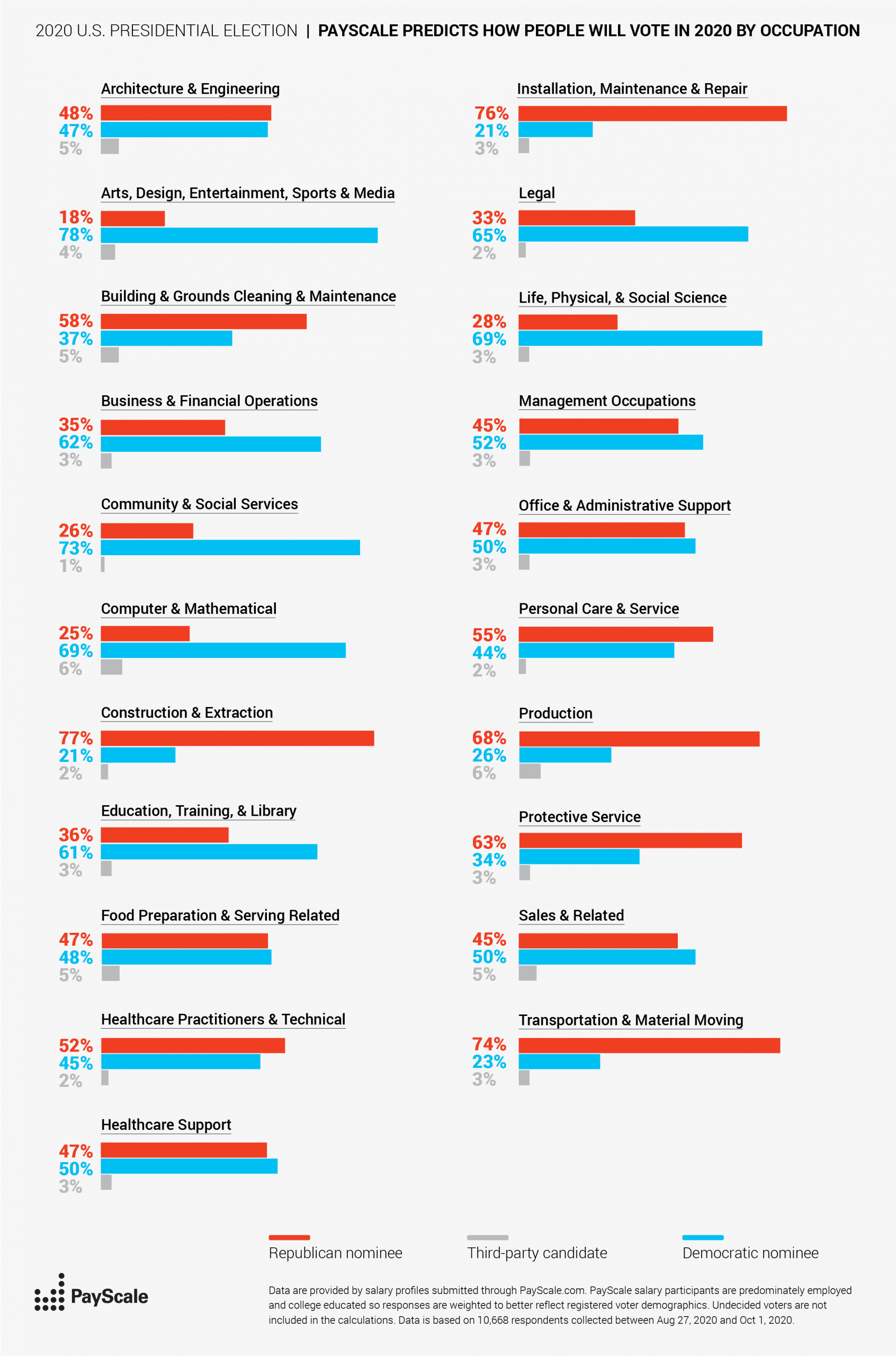 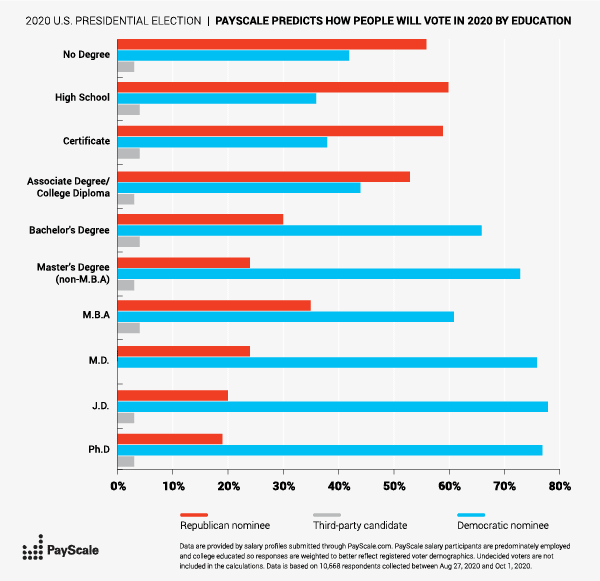 Trump is Favored by White American Voters, but Less So Than in 2016

Race was thought to be a significant factor in the 2016 U.S. Presidential Election but may play less of a role in the 2020 Election.

According to an exit poll by Edison Research for the National Election Poll, Trump carried the white vote by 21 percentage points in 2016.  White non-Hispanic voters preferred Trump over Clinton by 58 percent to 37 percent. Two years later, Pew Research reported a narrower but still significant disparity among validated voters, with white voters going to Trump by 54 percent and Clinton by 39 percent, a 15 point difference.

According to PayScale’s 2020 Election data, white voters are predicted to go for Trump 53 percent compared to 44 percent for Biden. This shows that there is still a substantial preference for Trump among white voters, but the difference of only nine percent sharply narrows the lead. Meanwhile, people of color are overwhelmingly predicted to vote for Biden. The only exception is American Indian and Alaska Native voters, which are shown to favor Trump. However, due to low sample sizes, this group may not represent national voting patterns. 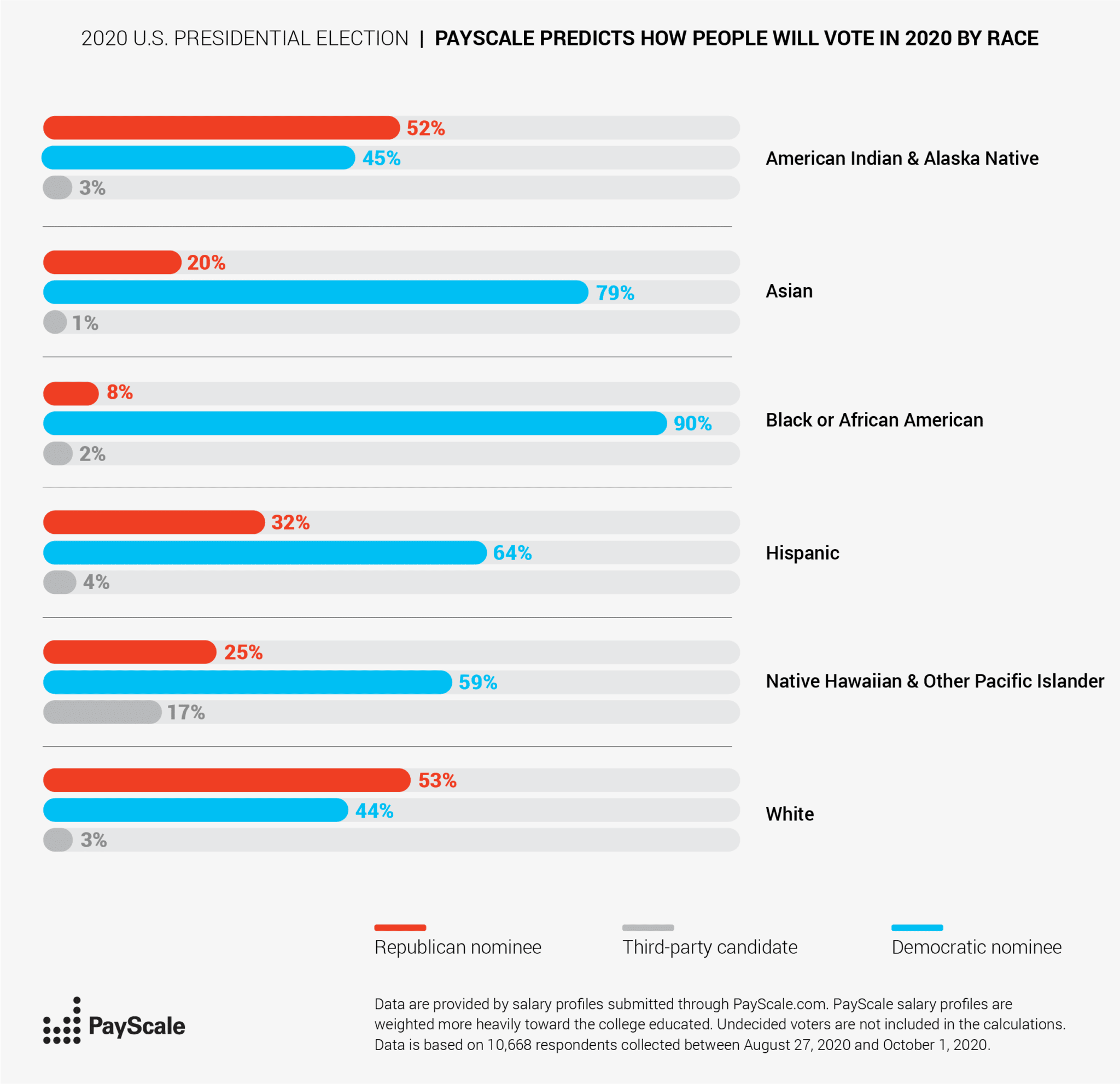 According to PayScale’s Election 2020 simulation, women are predicted to vote for Biden over Trump 58 percent to 40 percent. This is a gap of 18 percentage points, which is significantly higher than in 2016.

PayScale’s Election 2020 simulation predicts that men will vote for Trump 52 percent to 43 percent, a gap of 9 percent. Although men are still more likely to vote for Trump in 2020, this is a reduced gap from 2016 in favor of the Democratic candidate. 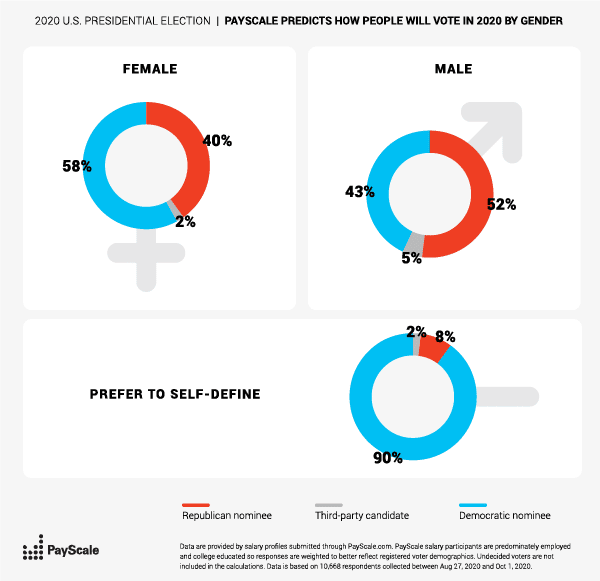 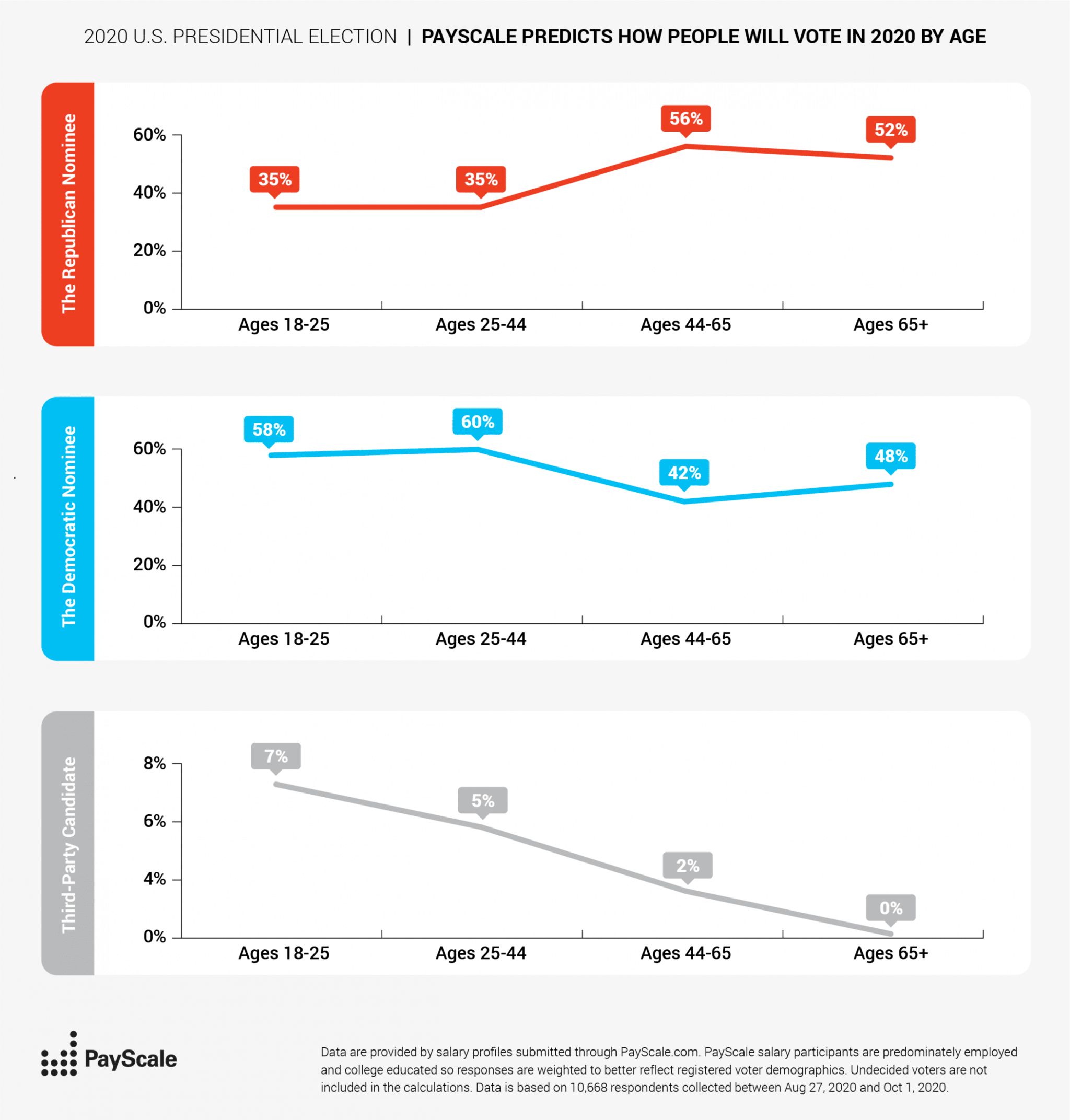 When it comes to compensation, people who make over 50K a year are more likely to vote for Biden in the 2020 Election. There is a gradual increase in the likelihood of Democratic voters to vote for Biden the more money they make. The reverse is true for Trump, with a slight uptick for people who make more than 200k a year. For the 2020 Election, the shift in voting behavior takes place at the 50-75K bracket. 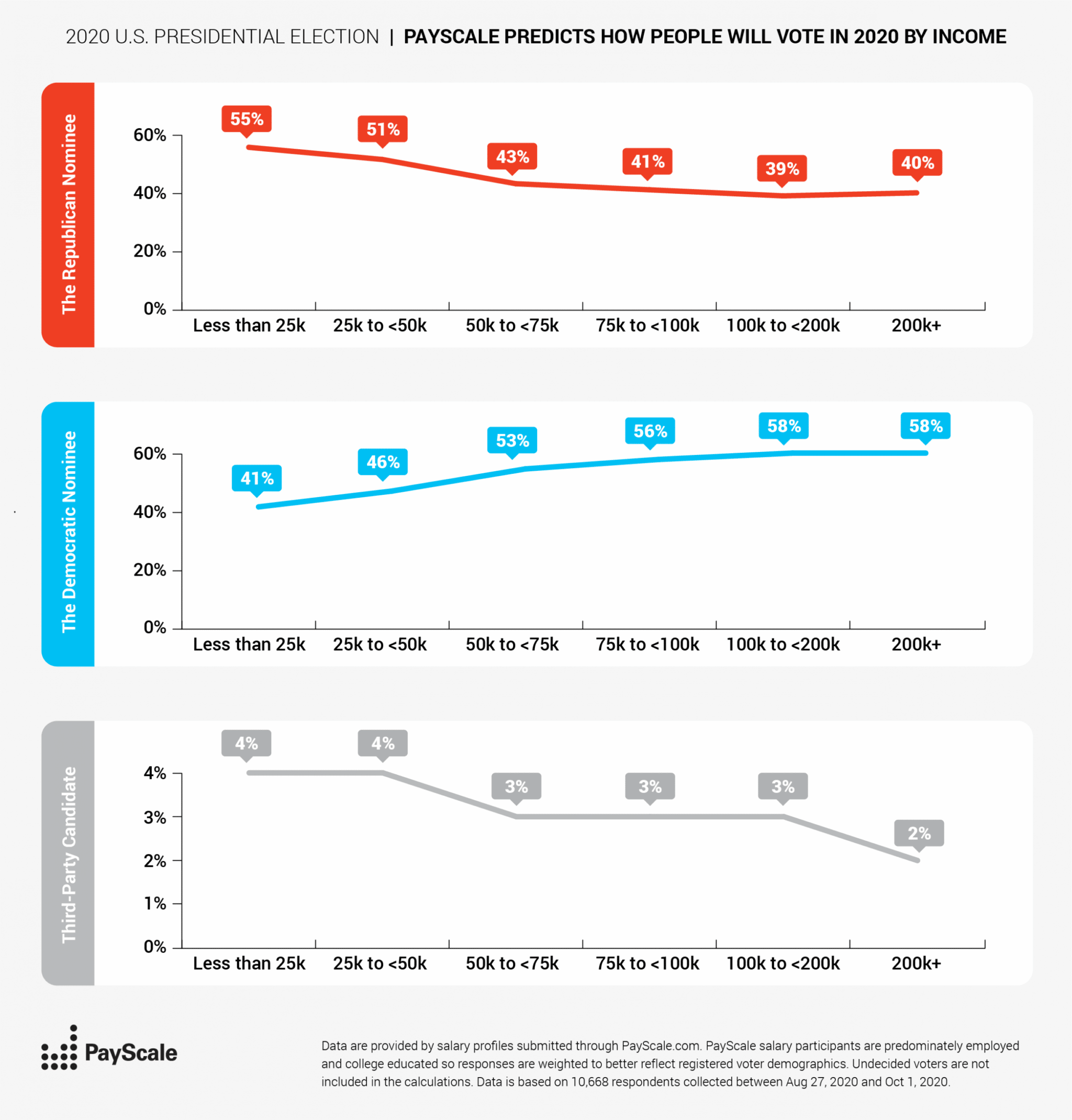 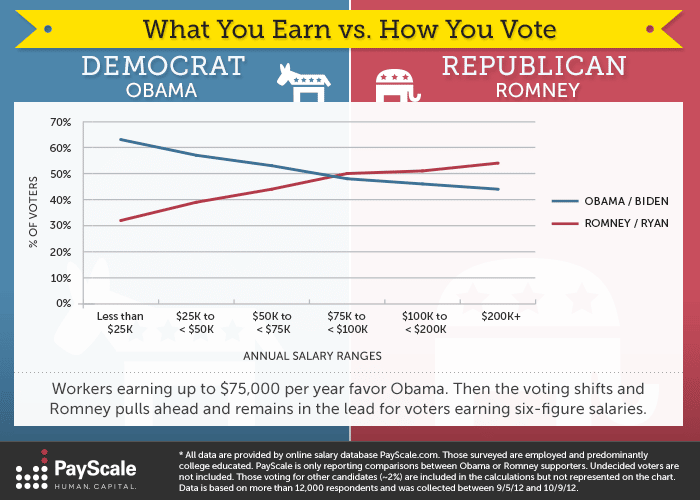 Analysis suggests that rising income inequality is an important issue in the 2020 Election, especially for Generation Z, which will make up a more substantial size of the voting block in 2020 than in 2016. It is also possible that high earners who cast their ballots for Trump in 2016 hoping for a radical candidate to shake up the status quo are changing their vote in the 2020 Election.

The 2020 Election will be a contentious election for many reasons. Polls may not reflect the actual election results, especially when it comes to the Electoral College. PayScale’s election simulation shows a tighter race on this front. When it comes to the breakdown of voters, one of the most interesting findings is the reversal from the last two elections in how voters propose to cast their ballots when viewed through the lens of annual income or total cash compensation.

We won’t know the actual outcome until the votes start coming in on Tuesday, November 3, 2020. Be sure to get out and vote.