Las Vegas is better known for its glowing lights, casinos and desert heat. But Sin City is also the home to many innovative entrepreneurs. The only downside is that Vegas lacks in office space. So these entrepreneurs have been forced to think outside the box and open up shop in the unlikeliest of places. These new workspaces, however, are actually working in their favor.

Shaun Swanson, the co-founder of mobile app Ayloo, started working out of bars. He and his team began finding ‘pop-up’ workspaces by engaging in co-working at any place that would have them — bars, restaurants, coffee shops, and even backyards.

“We think concepts in an industry are best defined through interaction with people outside that specific industry,” Swanson said. “By colliding with people outside of your industry more, you accelerate the definition of your ideas. Instead of being singularly interest-focused and insular, pop-up coworking sessions are inclusive of all type of communities — specifically to encourage cross-industry pollination — so a band manager can spark ideas for a restauranteur or a hacker can help an artist with their website.”

Other entrepreneurs have set up shop in vacant apartments. Downtown Project, which has a mission to change the culture of downtown Las Vegas, couldn’t find an office space, so its employees instead started working out of a vacant apartment in a high-rise building. Not only did they work from the apartments, they began living there as well. This sparked a new type of relationship with professionals who did the same in the same building — a neighborly community feel with people in different industries and professions.

This idea is being mimicked by #StartupBlockLV, which is the idea of turning an entire block into a startup working environment. Six businesses have already moved into the live/work spaces, and 20 more will soon become their neighbors.

“Startup culture and entrepreneurism in general is a lonely road. While you may be surrounded by friends, your mind is never completely off your project — it consumes you,” said Gabriel Shepherd, #StartupBlockLV community organizer. “The concept of Startup Block is to get the people in that scenario all living and working on the same block. You build a micro community among the larger tech scene, become more in tune with those companies, and a sense of accountability to each other forms.”

These types of working concepts help spark creativity by changing the way people work. It also allows for different companies to collaborate and develop together. Instead of competing, they are encouraging each other’s success.

We want to hear from you! Have you ever participated in a co-working project? Share your thoughts on Twitter or in the comments! 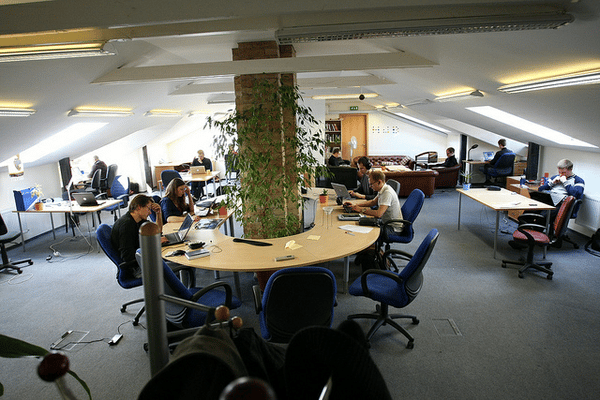