"What I don't like about office Christmas parties is looking for a job the next day." –Phyllis Diller

Between year-end bonuses and office holiday parties, there can be a lot to celebrate in the month of December. An open bar alone is enough to warrant the distinction of "the most wonderful time of the year." Here at PayScale, as we gathered twinkle lights to ready our desks for the holidays, we decided to ask our friends and co-workers about their holiday horror stories. Let these serve as a cautionary tale to help you keep your job for another holiday season.

"I once got into the usual 'I can drink more than you' debate with a wee intern. There were several day-glo-colored drinks available, and we were both drinking a blue tequila-based drink. Several glasses later I had the bartender start making mine with vodka instead, but keeping the blue curacao and then prodding the intern to keep up. The intern ended up puking all over his desk chair and spent some quality time with the toilet. Later, when I was helpfully cleaning up, I dropped an entire jello mold on the floor."

"When I worked in marketing at a Senior Living organization, one of the kitchen staff brought her own bottle of booze, drank most of it, then got into a fight with her co-worker and threatened to hit her with said bottle."

If you hit the eggnog too hard, you might find yourself in hot water with your co-workers and your boss. We heard tales of violent arguments breaking out, plus more than one story of co-workers who hooked up, with regrettable consequences. Go easy on the Nog, y'all.

"The husband's work holiday party was at the home of his boss. I got a little tipsy and demanded his boss give my husband a raise. Then I asked if I could take a bottle of wine (or three) back to the hotel. I got the wine, not the raise."

Fortunately, this party-goer's husband (and his boss) had a good sense of humor and nobody was fired. But it wouldn't hurt to prep your party date and go over a few office-party ground rules, just in case.

'"My bosses (owners of the company) were doing coke with some of the employees at our holiday party. I thought that was pretty bad, but I'm sure most of my coworkers thought it was rad. At that same party, I got so drunk that I passed out."

"My drunken boss cornered me in the office and attempted to woo me with his halitosis-and-whiskey-laden breath. And by 'woo', I mean groped. I left the company shortly after."

Sometimes it isn't the employee who needs to be on his or her best behavior. If your boss gets drunk or downright inappropriate, you might consider looking for a new gig. (Have you checked your salary profile on PayScale yet?)

We loved hearing from our users about their worst holiday party experiences ever. By far, the best response came from… well, we probably shouldn't repeat this person's name or location, lest we get subpoenaed:

The moral: when it comes to celebrating the end of the year with co-workers, you would be wise to consider enjoying your eggnog with a chaser of cautious professionalism. If not, one of these holiday horror stories could happen to you.

We want to hear from you! Share your holiday party horror story on Twitter, using the hashtag #CasualFriday. 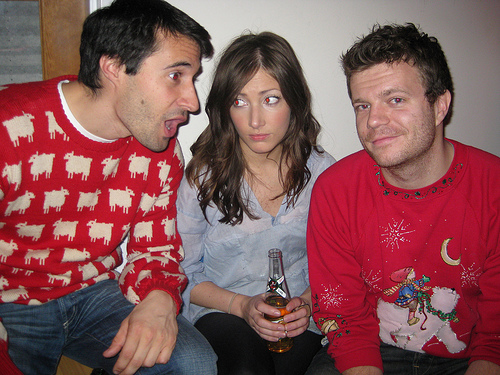