Did the recession kill middle-class jobs? A recent post on the Wall Street Journal’s Wonkblog makes a compelling case that it did.

“The vast majority of job losses during the recession were in middle-income occupations, and they’ve largely been replaced by low-wage jobs since 2010,” writes Brad Plumer.

Mid-wage jobs, as defined by work that pays between $13.83 and $21.13 per hour, made up only 27 percent of jobs during the recovery. This isn’t surprising, when you consider the sustained losses suffered by industries like construction and manufacturing.

Low-wage jobs paying less than $13.83 per hour, have boomed since 2010, making up 58 percent of jobs gained during the recovery. These include work in food services and retail, as well as “employment services,” which comprises everything from clerks to sales reps.

The problem with this, obviously, is that most people live in areas where $13 an hour (and less) just won’t put food on the table and clothes on people’s backs. Or, as a recent presentation from the Federal Reserve Bank of San Francisco, quoted in Wonkblog, puts it:

“These occupations are crucial to the support and growth of major industries across the country, but many of these workers do not earn enough to adequately support their families, even at a subsistence level.”

Workers who lost their higher paying jobs during the recession and replaced them with lower paying work made an average of 11 percent less than workers who kept their jobs during those years, according to the San Francisco Fed.

We want to hear from you! Do you have a lower paying job, post-recession? Leave a comment or join the discussion on Twitter, using the hashtag #MakeItHappen.

Are Women More Stressed Out at Work Than Men?

How to Make the Hiring Process Less Painful [infographic] 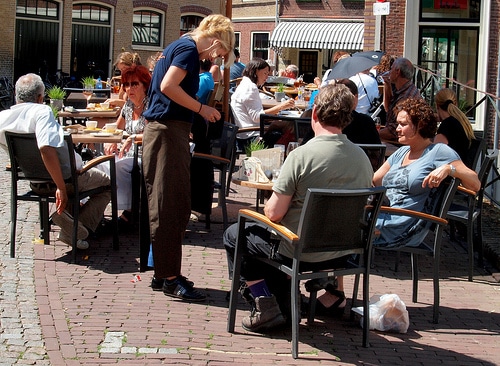