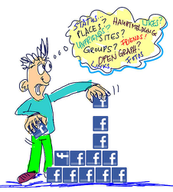 It's nice to know that someone is making money off of Facebook. Shares might be plummeting, but it's still a pretty lucrative gig for the people who work there, and it's not just Mark Zuckerberg and other high-ranking folks who are pulling down the cash.

Digg.com did a little, well, digging, and discovered that Facebookers (Facebookians? Facebookateers?) are doing pretty well for themselves. At least ten different job roles made $100,000 a year or greater. Even the interns were doing pretty well: Because Facebook wants to attract top talent, software engineering interns command an average of $74,000 a year.

Other high-earning gigs at the social networking giant include: