Is Your Stressful Job Aging You?

The intrepid blogger who wishes to cover the effects of stress faces a dilemma: Since everyone agrees that some kinds of stress are bad for you, and talking about stress only seems to make it worse, is it really helpful to bring up the subject at all?

"It's amazing how much we talk about it, and how little we're are doing about it," says Aoife O'Donovan in an interview with MSNBC. O'Donovan, a research fellow at the University of California San Francisco, studies the effects of stress on DNA.

The good news is that O'Donovan says that it's too early to make definitive pronouncements about the causal relationship between stress and aging. The bad news is that recent studies show that there seems to be at least some relationship.

Kirsi Ahola of the Finnish Institute of Occupational Health recently did a study examining telomeres, which are sections of DNA, and found that people with more job stress had shorter telomeres than people with less job stress.

"That matters because telomeres, located at the ends of chromosomes, serve as a kind of protective cap to the ropy strands, helping assure that the genetic instructions carried by genes on the chromosomes are accurately translated so cells get the right messages. Telomeres become shorter with age, oxidation and chemical insults. Often, when telomeres reach a critically short length, the cell dies in a process called apoptosis. Some cells don’t die. They become what scientists call 'senescent.' They sputter along, making genetic errors and causing damage."

The end result might be diabetes, cancer, or Parkinson's disease.

But back to that earlier point about actually doing something about all this stress. Ahola hopes that her findings will affect workplace legislation, making on-the-job stress a recognized health risk.

Until then, it's either take up meditation … or look for a new line of work.

New Research Reveals That Most Work Email is Irrelevant

3 Things You Can Do to Make Your Office Healthier 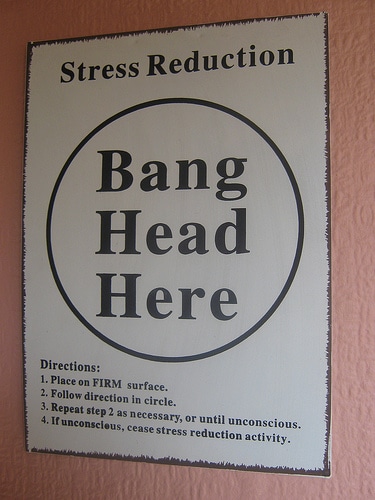