Like many founders, CEOs and top executives, John McAfee of the eponymous anti-virus company has a blog. Unlike many of his C-suite peers, however, he’s on the run from the law. Authorities in Belize want to speak to McAfee regarding the murder of his neighbor Gregory Viant Faull, but their efforts thus far have been unsuccessful.

McAfee’s blog describes his life on the lam. He’s written a series of posts that an administrator Chad posts on his behalf. The most recent missive, posted today, outlines the conditions in a Belize jail, where four of his friends are being held on what McAfee calls “trumped-up charges.” Here’s an excerpt:

What are the charges? The four legally licensed firearms on my property were not kept in the correct rooms of my property. Under the draconian laws of Belize, any law can be stretched to nab anyone for anything. This is not a joke or an exageration. Three of the guns were identical, single shot shotguns. Only the serial numbers can distinguish them. The wrong serial numbers were in the wrong rooms.

Entrepreneur cites various interviews McAfee has done with the media in which he expressed his belief that the Belize police are out to kill him. Whether you believe McAfee is innocent or not, one thing’s for sure: his blog is a compelling, if utterly bizarre, read.

The iPhone 5 Travels 20,096 Miles Before Ending Up in Your Hands [infographic] 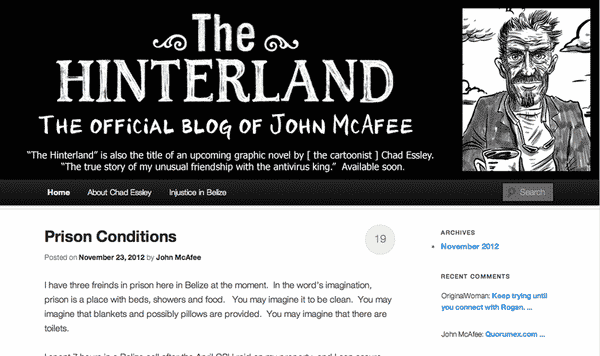