Nearly half of office workers think an afternoon nap would crank up their productivity at work, according to a new study commissioned by DealJungle.com. The money-saving website polled 1,000 people and discovered that 63 percent of respondents noticed a slump in their own productivity in the afternoon. While 46 percent said a nap would be the best solution, 37 percent would prefer to work through lunch if it meant they worked a shorter overall day.

"For many people, modern life is extremely hectic and the pressures of family and work commitments often mean that sleep is a luxury most cannot afford," a DealJungle.com spokesperson told InspiresMe. "The idea of an afternoon nap may sound childish; however, if it has the potential to increase productivity then it is an option which must be seriously considered."

Some companies are ahead of the curve when it comes to enabling employees to nap at work. Google, AOL Huffington Post Media Group, Cisco and Zappos are just some of the estimated 6 percent of U.S. workplaces that have nap rooms. Still more companies have napping areas or otherwise permit workers to get a brief bout of shuteye. These slumber-inducing amenities may have started as perks, but as more experts view sleep as a third pillar of health alongside fitness and eating well, it won't be long until they're considered necessary.

Does your workplace encourage afternoon napping?

How Do Employees Waste Time at Work? [infographic]
The Best Resignation Letter Ever Is a Song Set to "American Pie"
5 Ways Meetings Inhibit Productivity 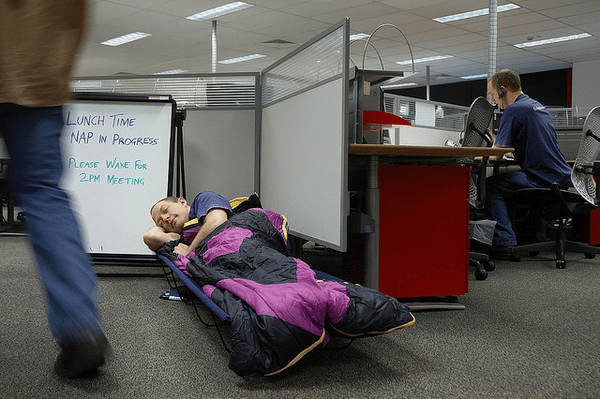