Earlier this week, Michelle Obama appeared on "The Colbert Report" to celebrate the first anniversary of Joining Forces, a program that helps veterans find jobs. Stephen Colbert marked the occasion by training a veteran to be his replacement. (Sort of.)

Civilian companies participating in the program have pledged to create over 100,000 jobs for veterans and their spouses by 2014.

Since President Obama signed the American Jobs Act in November 21, 2011, there's been a financial incentive to hire veterans. The Returning Heroes and Wounded Warrior Tax Credits provide up to $5,600 for every unemployed veteran hired and up to $9,600 for every veteran with service-connected disabilities.

But the First Lady was quick to say that the benefits of hiring veterans go far beyond tax savings.

"These people are bringing in skills that actually improve the bottom line of companies," says Mrs. Obama. "These are some of the most highly trained, highly skilled, disciplined people that we have in our society."

Veteran often have specialized training that prepares them for a variety of jobs in the private sector, including engineering work, law enforcement, and management consulting. In addition, the increasingly technical nature of military work makes former soldiers a good fit for the growing technology field.

Not to mention, you couldn't ask for an employee who is cooler under pressure. To prove that point, Stephen Colbert used the rest of the episode to train a Marine to become a pundit. The mission was a complete success.

5 Reasons You Shouldn't Quit Your Job Like Joe Muto, the Fox News Mole

Tattoos at Work: Is Your Body Art Hurting Your Lifetime Earnings? 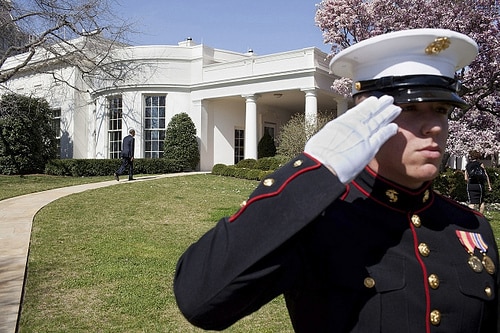