Off With Their Heads! Social Media Nightmares That Nearly Cost Brands Their Necks

Social media is a great way for a company to engage with its customers easily and quickly, making it an effective method for enhancing a brand’s image in the marketplace. But sometimes, things go terribly wrong and a momentary lapse of judgment leads to a regrettable post for all to see.

One of the more recently publicized social-media brand fails came from Amy’s Baking Company Bakery Boutique & Bistro in Scottsdale, AZ. The bakery had previously been featured on Gordon Ramsay’s “Kitchen Nightmares,” and the owners, Samy and Amy Bouzaglo, were apparently so difficult that Mr. Ramsay ditched them.

Since then, the Scottsdale bakery has seen a huge backlash on social media for the poor business choices: stealing tips from their staff, yelling at employees, cursing at customers, and buying cakes only to mark the price up and resell them in the bakery.

Because of the ample use of profanity in the Bouzaglos’ posts, I cannot include them here; however, you can view clips of their “Kitchen Nightmare” episode on Eater.com. Long story short, Amy’s Baking Company Bakery Boutique & Bistro failed to rescue itself when the negative feedback came pouring in from customers and viewers through various social media channels. (The train wreck can be viewed here.)

Not once did the Bouzaglos admit to their faults or apologize; instead they indicated that their social media accounts had been hacked. Customers don’t want to hear excuses, they want a humble resolution … and fast! It’s the responsibility of the company to respond quickly and, most importantly, professionally. But what happens when brands fail to handle these situations appropriately?

Here is a compilation of some of the best “What were they thinking?” posts made by some popular brands:

1. Celeb Boutique – After the tragic Aurora, CO school shooting, Celeb Boutique thought it be clever to include a trending hashtag on Twitter (#Aurora) in their post to try and have their fifteen minutes of fame. However, the response from the public was less than favorable and resulted in the exact opposite type of recognition that the brand was hoping for — absolute viral humiliation. 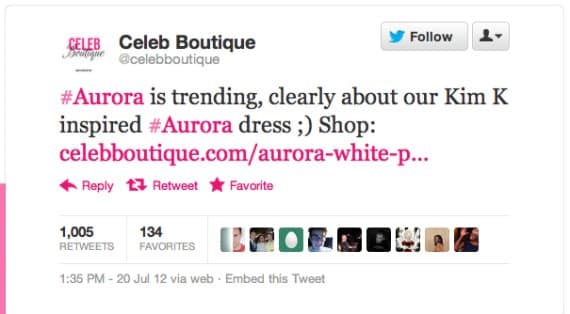 2. Nestle – Back in 2010, Nestle posted a status update on Facebook requesting that people not use modified versions of the Nestle logo for their profile pictures or they would be deleted. Well, to put it simply, people didn’t like the brand’s request and voiced their opinions loud and clear in the comments on the post (see image below). Nestle’s social media representative decided to add insult to injury and retaliate on the commenters with sarcasm and sheer unprofessionalism. 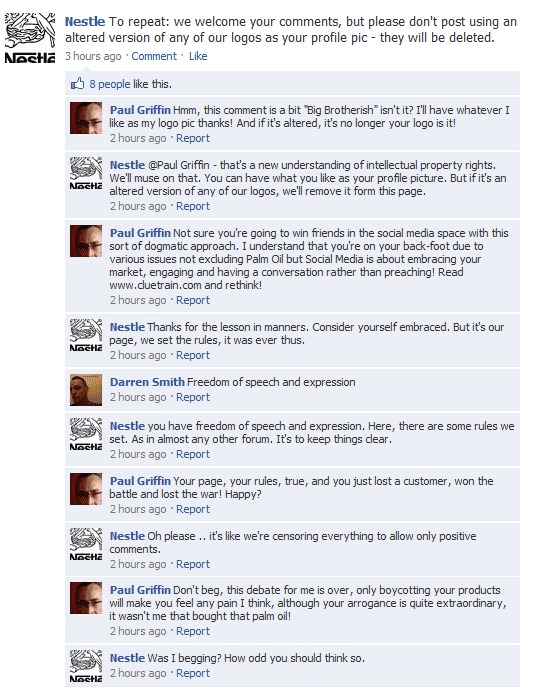 Nestle’s executives most likely got wind of the social media disaster and put an end to the embarrassment by issuing an apology to their followers for the offensive comments made on behalf of the company.

The tweet is painful to read and, not surprisingly, received immediate backlash. The representative later came clean and included her name and an apology in a follow-up tweet under the @KitchenAidUSA Twitter handle. This is an example of a brand responsibly trying to right the wrong of a regrettable tweet by one of its employees. But really, what was she thinking? 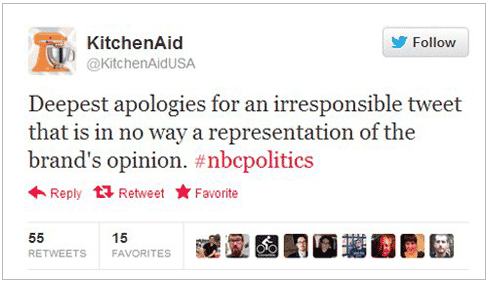 The lesson to be learned is that customers have been given a platform in which to voice their opinions, both good and bad, on social media, 24 hours a day, 7 days a week. Therefore, when companies experience negative feedback from people online, it’s best not to fight fire with fire because, as Gayle King puts it, “It’s a cut of a thousand deaths” when lashing out to criticism online.

Instead, it’s important for brands to listen to what the commenter is saying, apologize for the unfavorable incident, and find a speedy and amicable resolution to the problem. In doing so, the negative experience is turned into a positive one, the customer is happy, the brand is still intact, and others can see that the situation was handled appropriately, which is great for brand image.

So what can the consummate social media professional learn from this rather extreme example of what NOT to do? Don’t mix personal and professional social media, especially in cases where someone is hired to handle a company’s social profiles. Never use a brand’s social media account to express personal opinions, and don’t allow emotions to interfere when responding to customer complaints online. Failure to separate the two can lead to a brand’s reputation to be jeopardized and experience an unfortunate loss of loyal customers as in the examples listed above. It’s simple: think before you tweet, people. No one looks good with a foot in their mouth.

Have you seen a company commit brand-suicide on social media? If so, share your story on Twitter or in the comments section below. Sharing is caring.