Can You Get a Promotion by Mimicking Your Boss’s Body Language?

You already come in early, stay late, and work harder than you ever thought humanly possible. The trouble is, thanks to the economy, everyone's doing all those things. What does a person have to do to stand out from the cubicle crowd?

How about prey on the boss's unconscious mind?

Experts say that simple tricks like copying your manager's body language can create the illusion of connection — and make it both harder to fire you and easier to give you that promotion you've been angling for.

"Some people say [the unconscious mind] is touchy feeling stuff that has no basis in science," says PsychTest's Dr. Ilona Jerabek. "Whether we realize it or not, our emotions impact the decisions we make and the way we solve problems. These specific tricks … create instant rapport without realizing it consciously."

Other tricks include sitting on your supervisor's dominant side. It sounds weird, but we all unconsciously favor our dominant hand. So sitting on your right-handed manager's right side can literally transform you into his or her right-hand man. (Or woman.)

Want to kiss up with coffee? Make sure it isn't iced coffee. Researchers have found that people who offer cold beverages are perceived as "meaner and less friendly" than those who proffer hot drinks. Which leads us to believe that researchers have never worked in an office with broken air conditioning in August.

Then there's your basic office feng shui: leaving your door open suggests that, well, your door is always open, while opening a window makes people think that you're open to ideas from outside the office. And it might be worthwhile to invest in some plants: Experts say they relax visitors.

One thing you don't need to worry about is keeping a clean desk. Futurist Martin Lindstrom says that too much perfection isn't relatable. Good news for those of us who, ahem, "have a system."

Study Links Suppressing Your Identity to Job Dissatisfaction and Turnover 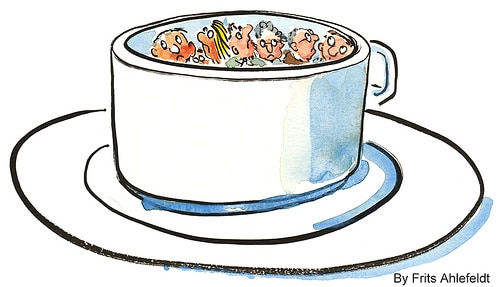