It’s not just you that’s sitting at your desk daydreaming about the beach instead of doing work: a study of 600 white-collar workers by Captivate Network revealed that during the summer, productivity drops a full 20 percent. This productivity lull persisted despite an array of policies like telecommuting, longer Monday-through-Thursday workweeks, and early arrival or departure.

Summer Fridays, which we’ve previously featured here at PayScale, came under fire in the Captivate Network study. Four percent of the companies reported closing early on Fridays, but 80 percent of their employees admitted to decreased productivity. What’s more troubling, 16 percent of workers felt that stress in their offices actually rose in accordance with a Summer Friday policy.

“These are surprising — and perhaps unwelcome — findings,” said Captivate Network president Mike DiFranza in a news release. “On the face of it, summer hours probably seem like a terrific idea and are welcome by all. Unfortunately, the impact is almost uniformly negative. Given the state of the economy and the unease felt by many workers, perhaps it’s time to reconsider these types of policies.”

The summer policy that seemed to work best (other than banning summer hours altogether) was telecommuting. Less than half of employees reported decreased productivity, while 14 percent reported increased stress. Check out the full breakdown below. 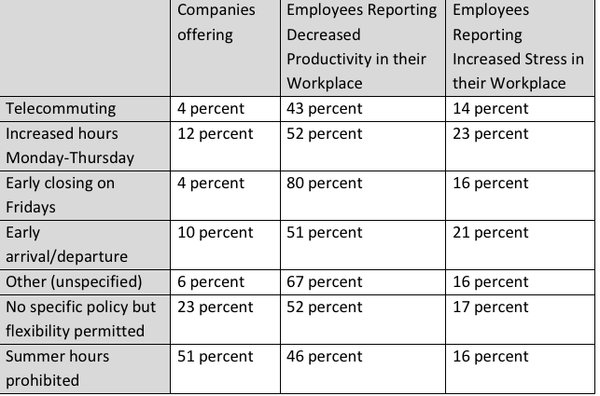