Tattoos at Work: Is Your Body Art Hurting Your Lifetime Earnings?

Mainstream society is increasingly focused on individuality; accordingly, we’re seeing far more tattoos at work than in previous generations. Bryan Caplan, an economics professor at George Mason University, recently raised a fair question in a blog post for EconLog: How much would obvious body art, like a facial tattoo, affect one’s lifetime earnings?

For starters, tattooed individuals may have more trouble securing a job than candidates without ink. Vault.com surveys reveal that 85 percent of respondents think tattoos and piercings influence a candidate’s chances of being hired by an employer. In the same surveys, 53 percent admitted that they currently conceal their piercings or tattoos at work.

What’s the big deal about body art? Caplan says that it’s all about perception:

Many economists would presumably insist, “It’s not causal. The kind of people who tattoo their faces just have low productivity.” I admit that selection is part of reason why people with face tattoos rarely make the big bucks. But I bet that a lot of the effect is causal: A tattoo signals low productivity — and the market penalizes you accordingly, even if you’re the high-productivity exception that proves the low-productivity rule.

We don’t have hard data on the salaries of tattooed workers versus ink-free employees at the same position and skill level, but one thing’s for sure: when in doubt, it’s wise to cover up, just in case.

Savvy thinkers are capitalizing on this clash between cultural preferences and the traditional work environment. Strive, an East Harlem advocacy group, teaches job-seekers how to cover their tattoos with makeup. And in 2009, celebrity tattoo artist Kat Von D released a highly pigmented makeup line with Sephora meant to help consumers cover up their tattoos.

What do you think about tattoos at work?

Tipping Etiquette: When and How Do People Tip?
Disgusting! How to Handle Offensive Office Hygiene
Napping at Work Is Good for Your Heart 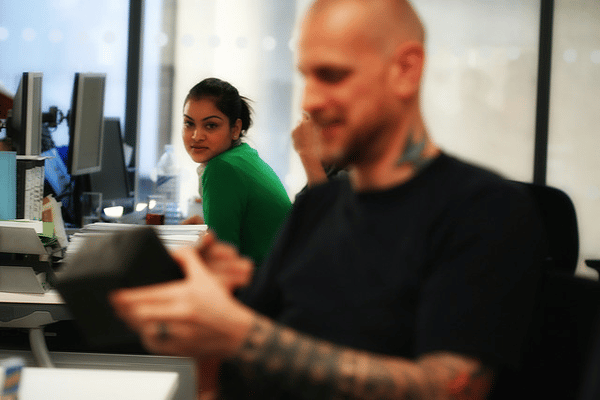