The latest unemployment data seems to show positive gains for women. The female jobless rate – 63 percent by the last count – is the lowest it’s been for five years. Men’s, in comparison, remains above 7 percent. Women are finding work, pushing down that unemployment rate, but the jobs they’re landing aren’t the most lucrative. 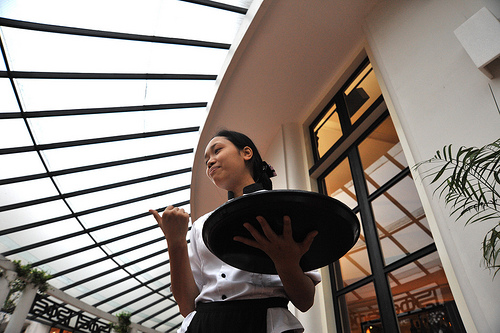 Bloomberg crunched the numbers and found that those gains for women have been in mostly low-paying job sectors, like hospitality, in-home care, food prep and housekeeping.

The bulk of the increase in female employment – 60 percent of it from 2009 through last year – was in jobs that pay $10.10 or less an hour. By contrast, only 20 percent of male jobs were in a similar payscale, per a study based on U.S. Bureau of Labor Statistics figures by the National Women’s Law Center.

That’s a problem not because waitressing is a terrible job, but because it widens the inequality gap.

“The very definition of what it means to be middle class is being undercut by trends in our economy that must be addressed,” Treasury Secretary Jacob J. Lew said in a Sept. 17 speech in Washington, Bloomberg writes. “These trends – like the increase in income inequality and the decline in upward mobility – did not happen overnight.”

Numbers reveal a weak spot in the U.S. recovery that lowered the jobless rate to 7.3 percent from the double-digits four years ago, but hasn’t exactly opened up opportunities for quality employment. Women gained 125,000 jobs last month, but 54,000 of them were in retail, hospitality and leisure. Some 24,000 were in business and professional services. Overall, most were part-time, with 34 or fewer hours a week.

Women take these jobs driven by economic necessity, often because jobs they aspire to in teaching and the public sector have vanished. Women lost 444,000 public-sector gigs since 2009. Men, just 290,000.

Jezebel writer Erin Gloria Ryan says that’s not just a problem for the middle class, but for the poor, too.

“This pushes the least educated people down even further, leaving them fewer options for employment, and it effectively transforms an entire population of loan-ridden college grads into lifelong debt slaves.”

Are you a woman who works in hospitality? Is it a job you enjoy or would you rather find work in another industry? Leave a comment and tell us about it on Twitter!