What did you want to be when you grew up? Chances are, it was along the lines of unicorn wrangler or astronaut/basketball player – just the sort of thing that’s impossible find a major in, never mind a grownup job. That doesn’t mean that all real jobs are boring or unsatisfying; during the compilation of PayScale’s latest report, The Most and Least Meaningful Jobs, workers with titles as diverse as English teacher and chiropractor told us that their jobs made the world a better place. And then were the other folks, the ones whose jobs made them long for the days when “vet who specializes only in kittens” seemed like a reasonable career path.

People with these jobs told PayScale that their work makes the world worse:

Percent who said, “My job makes the world a worse place.”: 25 percent

Percent who said, “My job makes the world a worse place.”: 21 percent

Percent who said, “My job makes the world a worse place.”: 20 percent 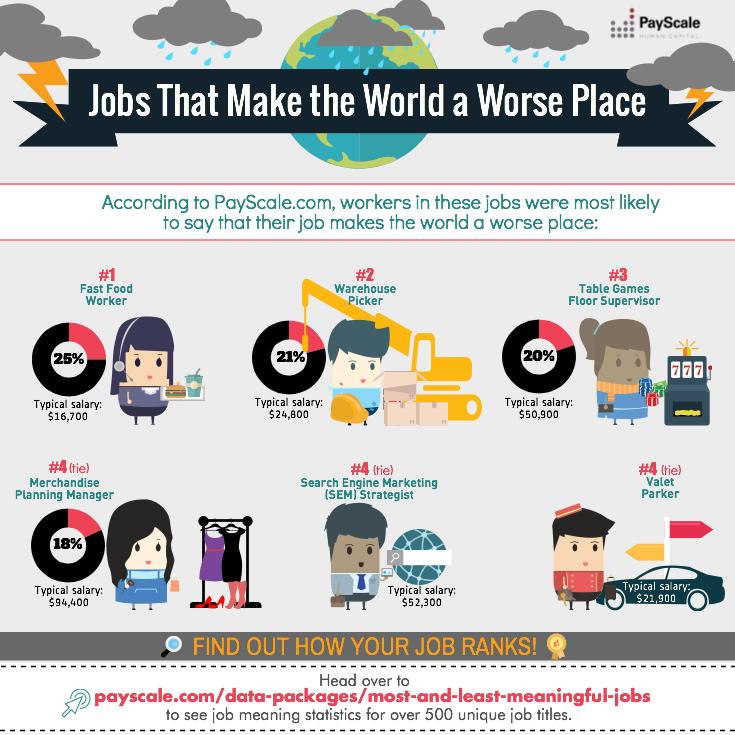 What do these jobs have in common? Most are low paid – although by no means all. Merchandise Planning Managers pull down a median annual salary of $94,400, and Table Games Floor Supervisors earn a respectable $50,900.

Even the high-paying jobs on the list, however, share a trait with the lower-paying gigs: they either expose the worker to the impact of the worst aspects of humanity (e.g. Valets and Laundry Attendants), and/or encourage those negative traits (Table Games Floor Supervisors, Search Engine Marketing Specialists). Another issue is that many of the jobs are the hat trick of awful work experiences: boring, tough, and dirty (Fast Food Workers, Warehouse Pickers).

Most importantly, the majority of the jobs on the list don’t provide the features of a good job. In his book Outliers, Malcolm Gladwell says that meaningful work has three qualities: complexity, autonomy, and a clear relationship between effort and reward. Whether you’re toiling in a warehouse, packing boxes, or sitting at a computer, managing paid search ads, the world is full of jobs that requires a lot of work for not much in return. The goal, of course, is to pick the ones that do just the opposite.

Does your job make the world a better place? We want to hear from you! Leave a comment or join the discussion on Twitter.

Seems as though the two catagoreis of unsatisfied workers, warehouse picker AND merchandise planning manager are affecting how well I like my retail job as a Department head for local retail establishment . My interest in my current duties have diminished over the last three years mainly due to issues of how pallets are not safely compiled, delays in shipping, and displaying merchandise supposedly from the corporate buyers to accelerate sales. The problem though, it’s not working!.After nine years with… Read more »

In my opinion, a job that makes the world worse are those that doesn’t help our country to become peaceful. The only thing worse on the listed jobs are the low paycheck though, you can’t barely survived earning that amount but what can you do, it is better to have a job with low paycheck than not having a decent work at all.
http://www.getbetterjob.com