The State of Wage Inequality in Tech in 2018

The tech creed of “go fast and break things” has helped restructure American life. How we communicate, get around and get our information have all drastically changed because tech companies have disrupted outdated ways of doing things. There is, however, one aspect of American life that tech has not changed and may have even exacerbated: racial and ethnic wage inequality.

According to a 2016 EEOC report, black and Hispanic workers are drastically underrepresented in the fast-growing and lucrative tech sector, while white and Asian workers are overrepresented. But tech’s diversity problem goes much deeper than questions of representation. For certain minority groups, discrimination extends all the way into their wallets.

Looking only at those with the job title of software developer in the tech industry, we see the same pattern: on average, black and brown coders earn less than their white counterparts, while Asian developers earn more. The picture is more nuanced when we look at the full distribution of wages and not just typical earnings. While Asian developers’ earnings skew higher, there is no statistical difference between the pay of white and non-Asian PoC software developers. This offers us a glimmer of hope in terms of pay equity for those who can get these lucrative jobs.

Pay Inequity is a Major Element of Tech’s Diversity Problem

Between January 2016 and June 2018, over 52,000 workers in the tech industry took PayScale’s online salary survey and reported their race in addition to information about their occupation, location and other compensable factors. We define the racial wage gap as the cents on the dollar that a racial/ethnic group makes compared with white workers.

When we look at the uncontrolled gap, we see that Native American, black and Hispanic all make less than white workers. The largest gap is for black workers, who earn $0.87 for every dollar white tech workers earns. Even when controlling for a long list of compensable factors, the wage gap remains for these race/ethnic groups. Our controlled wage gap shows that Native American workers earn $0.99 on the dollar in tech, while black and Hispanic workers make $0.98.

The controlled racial wage gap numbers are significantly smaller when we take into account various compensable factors. However, we can still see that many racial and ethnic groups do not get equal pay for equal work in tech. Furthermore, the disparity in the uncontrolled and controlled racial wage gaps highlights that black and brown tech workers are underrepresented in higher-earning positions.

Consider this together with another disturbing trend: even as the number of black and Hispanic students getting STEM degrees is increasing, their representation in the ranks of tech firms is not. Until tech closes the gap on hiring and promoting workers of all races, the racial wage gap for black and brown tech workers will remain stubbornly in place.

Earning differentials for Pacific Islanders fare somewhat better.  In terms of the uncontrolled wage gap, Pacific Islanders make $0.98 on the dollar. They are also the only group for whom the racial wage gap completely disappears when controlling for compensable factors.

Asian workers earn more than white workers in the tech industry. They make $1.23 for every dollar a white work earns. When we look at the controlled wage gap, Asian workers earn $1.02 for every dollar paid to their white peers.  This tightening of the pay gap reflects some degree of occupational segregation, with Asian workers tending to hold higher-paying technical positions. According to the Bureau of Labor Statistics, Asians represent 20.8 percent of all computer and mathematical occupations even though they represent only 6.2 percent of the labor market.

While the pay numbers may look good for Asian tech workers, we don’t want to suggest that they have it easy. First, the “Asian” umbrella is one that covers many ethnic backgrounds, and how someone from Korean origin is perceived and treated in the workplace will generally be different than how someone of Filipino origin is perceived and treated.  No doubt that these differences, along with a myriad of other factors, have caused income inequality among Asians to be greater than for any other racial/ethnic group.

Second, while Asians may be overrepresented in tech, they tend to be underrepresented in middle- and senior-level management positions. Indeed, research suggests that of all demographic groups, Asian women are the least likely to reach the top of the ranks in tech.

The industry-level data that we presented in the previous section includes many jobs that are not typically considered “tech jobs.” This includes people working in tech companies in non-technical roles such as office managers, content writers and HR specialists.

When people talk about tech workers, frequently they mean software developers. To get a deeper look at the racial wage gap in tech, we narrowed our investigation to workers with this highly sought-after title and examined the distribution of their pay. To get the clearest picture of how pay varies by race/ethnic group, we limited our sample to early career programmers who met the following criteria:

These restrictions help us get an apples-to-apples comparison while also having a sufficient number of observations. Nevertheless, due to sample size constraints, we used three broad racial/ethnic groups: Asian, non-Asian people of color and white. The Asian group includes Native Hawaiian and Other Pacific Islanders. Non-Asian PoC includes black, Hispanic and Native American workers. 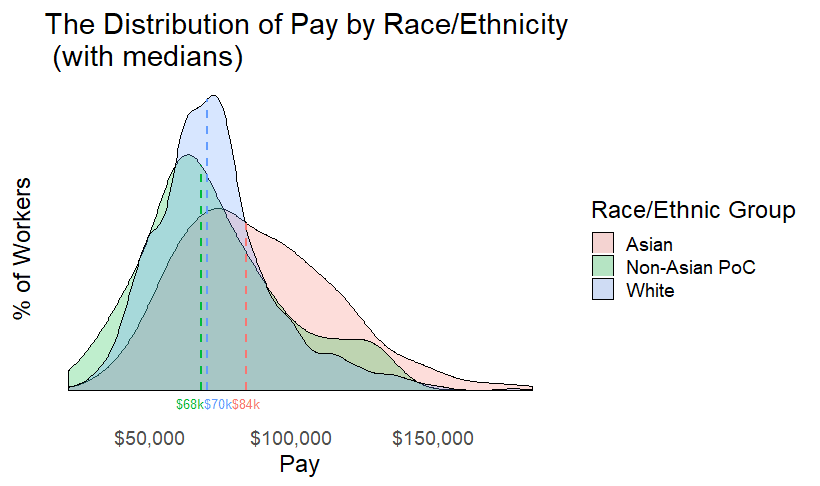 We tested to see whether the underlying distributions for these three groups are really the same (see Methodology for details). The pay distribution for Asian developers is greater than that of the other two groups, which suggests that they make more than their white and non-Asian PoC counterparts. Again, we do not want to suggest that all ethnic groups that are considered Asian are treated equally or that they have an easy time in tech. For example, because we restrict our sample to non-managers, we cannot address the research we cited above about Asians being less likely to ascend into management positions. We also do not control for location, so some of the differences are likely due to Asian workers being concentrated in high-paying but also high-cost locations like California.

When we compared the distributions of pay of white and non-Asian PoC, we found no evidence that they are different. This is encouraging as it suggests that black and brown developers are being paid in-line with their white colleagues once they get their foot in the door.

The tech industry prides itself on disrupting old and outdated ways of doing things, and they have undeniably succeeded in many dimensions. Few people today think of finding a pay phone to make a call. Most of us do not stand on a corner to hail a ride. We have more information at our fingertips than what’s contained in entire libraries. But when it comes to achieving equity in pay, the tech industry as a whole is behind the times.

Given the importance of tech in shaping our lives and in driving the global economy, intentional changes that promote pay equity would go a long way to making the world a fairer place. The first step tech companies could take is to evaluate their current pay structure and promotion practices and assess where there might be gaps. Companies should also communicate transparently with employees the criteria for raises and promotions. In an effort to be even more transparent, companies could choose to share salary ranges for jobs. Transparent conversations about pay not only lead to more equitable outcomes – they also improve employee engagement.

These recommendations are a departure from how many companies normally do business. But tech has never been about doing things the normal way. It’s past time to go fast and break racial/ethnic inequities in tech.

These are the kernel density estimation (using R’s default bandwidth) of pay by race/ethnicity for over 950 white, 230 Asian and 150 non-Asian PoC developers.

To test if the data are pulled from the same underlying distribution, we used the Kolmogorov-Smirnov test. The null hypothesis is that the distributions are the same.

Individual Contributor: Employees who do not manage others.

Race/Ethnicity: Only respondents who chose exactly one of the below, but not “Prefer Not to Answer,” were included:

Software Developers: Includes those who report their job title as “software developer” as well as more specific titles such as “Java developer” or “Video Game Programmer.”

Total Cash Compensation: TCC combines base annual salary or hourly wage, bonuses, profit sharing, tips, commissions, and other forms of cash earnings, as applicable. It does not include equity (stock) compensation, cash value of retirement benefits, or value of other non-cash benefits (e.g., healthcare).