When you are choosing a college, location is one of the biggest deciding factors. Whether you want to stay close to home or travel to a state you’ve always dreamed of living in, PayScale’s College ROI Report can help you find the best value colleges by state.

Public colleges often offer lower tuition for residents of their state, so you’ll notice that state schools are entered twice — one ROI figure is based on in-state tuition costs, and another is based on out-of-state tuition costs. (These are noted near the school name.) If cost is a major factor in deciding where to go to school, you may want to consider in-state public colleges as a top choice. However, some more expensive private colleges are more generous with financial aid, or may give you more attention and allow you to graduate faster, so pay attention to how ROI changes when financial aid is applied or how many years it takes the typical student to graduate from each school. (All cost figures used for the College ROI Report assume students graduate in four years.)

By narrowing our report on college return on investment by state you can find out which colleges are good investments, and which ones leave you in the red. College is expensive, and it is a huge investment in both money and time. Knowing what kind of return on that investment colleges in each state give you can help you make important financial decisions that will set you up for a successful career. If you know which state you want to live in, browsing the College ROI Report rankings by state make it easy to choose a college that sets its alumni up for success. Even if you have your heart set on a school with a low return on investment, you can plan accordingly and make sure that it’s not something you go into heavy debt for

The average value of college education by state varies a lot. States with more engineering colleges, or states with particularly booming economies may see higher ROIs than states in which unemployment is high or where there are few technically-focused colleges. States with many more schools in them, like California or New York, have a much bigger variance of ROI statistics than states with very few schools. That is just the law of averages at work. Alaska only has two colleges included in PayScale’s College ROI Report but has the highest average 20-year net ROI and annualized ROI figures of any state in the United States even though neither schools is in the top 100 nationally. This doesn’t mean that Alaska schools are the best deal possible, it just means that there are no negative ROI schools to drag them down.

Other ways to search for best value colleges: 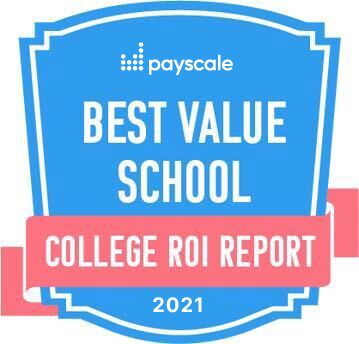 PUT A BADGE ON IT

WHAT AM I WORTH?
What your skills are worth in the job market is constantly changing.