What ‘Diversity’ Really Means and Why It Matters for Your Organization

This is an excerpt from our recent ebook collaboration with BambooHR entitled How to Turn Diversity Into a Major Asset for Your Organization. Download the full ebook here.

Most of us suffer from functional fixedness — “the inability to realize that something known to have a particular use may also be used to perform other functions” — when it comes to diversity. When we think of diversity, we tend to think primarily of two things: race and gender. But diversity encompasses much more than just those two areas. There is inherent diversity, the diversity you’re born with, which includes those familiar characteristics like race, gender and ethnicity. There’s also acquired diversity — things like socioeconomic status, education, experience and thought.

When we think of diversity, we tend to think of race and gender. But diversity encompasses much more.

Adopting that new perspective starts with the idea of managing diversity as a way of mitigating risk, and not in the way you might initially think. Again, we’re breaking out of that old way of thinking about diversity; we’re looking at the bigger picture.

Think about when you talk to your employees about their 401(k) plans, or even when you talk to your own financial advisor: What is the single most common recommendation? It’s that we diversify our investments — that we don’t put all of our eggs into one basket, so to say. We all know it’s wise to maintain a financial portfolio that doesn’t have a single point of failure. We diversify to insulate against risk.

This principle is actually applicable to every system, not just financial ones. And that includes our people systems.

It’s absolutely crucial that the people who make up our organizations are diverse, because it’s diversity that enables a company to protect itself. Diversity is the “checks and balances” a people system needs; it’s the way we insulate against that single point of failure. Without diversity, we put our organizations at risk in the same way we do when we put all our financial investments in one place. If that one place fails, the whole system fails.

Part of our role as HR professionals is to mitigate this risk by proactively designing diverse people systems.

Managing diversity is not only important for risk avoidance; it’s also key in driving business goals. A 2016 Harvard Business Review article described three studies that highlight how diverse teams are better for organizations:

Let’s get clear on exactly what we’re talking about when we say “diversity,” and define specifically what issues we need to consider in working through diversity initiatives.

What Do We Mean by “Diversity”?

When we’re talking about diversity in the 21st century, we’re referencing a wide range of differences, some of which might be protected classes under Title VII, a.k.a. the Civil Rights Act of 1964. As an HR professional, you’re probably already familiar with Title VII, including protections around race, color, religion and national origin. There are also protected classes under federal laws — pregnant women, for example, or persons age 40 and over. There are protected classes under state and local laws, too. Consider Oregon: Anyone age 18 and over in this state is protected on the basis of age. It’s important that we’re all aware of our local laws and how they apply to our organization.

In addition to characteristics covered by law, by “diversity” we can also mean “anything that can be identified as ‘other’.” That might mean a difference in generation, socioeconomic status, personality (think introvert versus extrovert), etc. In upcoming blogs, we’ll call out differences that might not normally come to mind when we think about diversity. We’ll also continue to come back to the idea that these differences can truly be beneficial in a work environment.

We know that having a diverse workforce can present some challenges.

They might be legal challenges, challenges getting people to work well together, challenges around ensuring various groups are adequately represented in the organization…. But perhaps even more important than considering the challenges diversity brings is recognizing the opportunities it creates.

Something to note is that bias is a universal human trait. It’s absolutely nothing to be ashamed of, but each of us should be aware of our own perceptions and how they influence our actions. Everyone has biases, but it’s when we bring them into the workplace that they become workplace issues. Some biases that directly impact diversity and gender pay gap and racial wage gap issues – where employees are negatively impacted based on their demographics.

Another word we might use in place of bias is “prejudice,” which means having a preconceived notion about something or someone. And it’s important to note when thinking about bias or prejudice that this isn’t only about being against something; people can also have biases or preferences for things, too. Again, this is completely natural, but it can become problematic when biases are active in a work environment.

It’s helpful to keep in mind the cyclical nature of beliefs leading to behaviors leading to results. 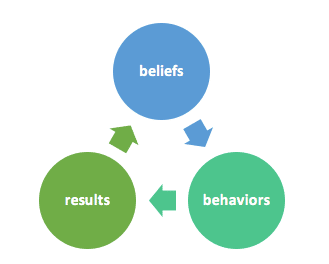 The cycle repeats on a loop, and the only way to undo it is to spin it the other direction.

The initial belief, the bias, may be unconscious; it may not be intentional. Yet the cycle still happens. The way to undo it is to trace backwards from results to behaviors, and then back to the underlying belief.

Just like with any other important aspect of our businesses, we need to be thinking proactively about diversity, and handling it with intention. That means acknowledging that biases are always going to be present — because we’re all human — and that we need to do our best to mitigate the associated risks.

The Workforce is Becoming Larger and More Diverse

As mentioned previously and as you likely already know, our workforce is becoming more diverse. The Bureau of Labor Statistics says:

Additionally, a United States Census Bureau white paper states, “ … by 2044, more than half of all Americans are projected to belong to a minority group (any group other than non-Hispanic White alone); and by 2060, nearly one in five of the nation’s total population is projected to be foreign born.”

But even if your particular workforce isn’t becoming more diverse, most likely, your customer base is. Let’s say you’re a retail business. To sell your product effectively, you must know your target audience. And beyond knowing who’s in your audience, you need to demonstrate you know them — customers want to see themselves reflected in your organization. How your company positions itself toward potential customers can really impact their willingness to purchase your product. And this applies to organizations in all industries.

Regardless of what type of organization you work for or who you consider to be your customers or clients, there is always reason to be thinking about diversity. It benefits everyone.

Interested in a further deep-dive on diversity? There’s a lot more info in the ebook—grab a copy today!

What’s the most surprising diversity issue facing your organization? We want to hear from you. Tell us your thoughts in the comments.