During 2015 and 2016, we collected data related to employee experience from over half a million workers who took the PayScale Salary Survey. Our research revealed what matters most — and what doesn’t make much difference — for creating a great employee experience. This is an excerpt from the resulting report, The Formula for a Winning Company Culture. Download the full report here.

“Employee Satisfaction” and “Intent to Leave” are the experience outcome variables we used for this study. The basic idea is that everything an employee experiences at work contributes to how satisfied (or dissatisfied) they feel from day to day. How satisfied they feel — which includes how they feel about pay, workplace communication, appreciation, their company’s future, etc. — is a major piece in determining whether they plan on leaving their company in the next six months.

Most of the questions we asked instructed the employee to rate each statement on a five-point scale from “strongly disagree” to “strongly agree.” The only exception was a question about attrition, where respondents answered yes or no when asked if they plan on actively seeking employment outside of their current company in the next six months. Here are the criteria we measured:

And here’s what we learned:

… But Some Factors Matter Way More Than Others

So, what matters most? 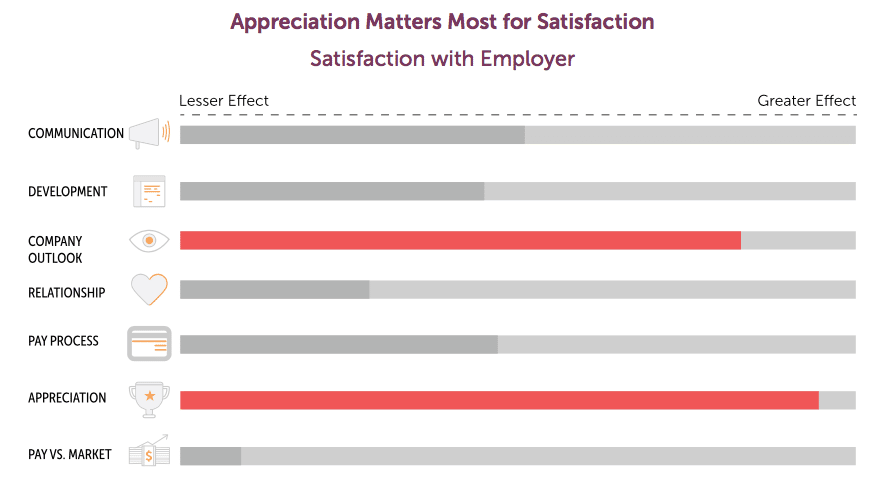 For employee satisfaction, there were three clear tiers of importance for variables.

Appreciation is key: An employee feeling appreciated or unappreciated moves the needle on satisfaction more than any other variable. Company outlook is second most important, with 87 percent the strength of appreciation. 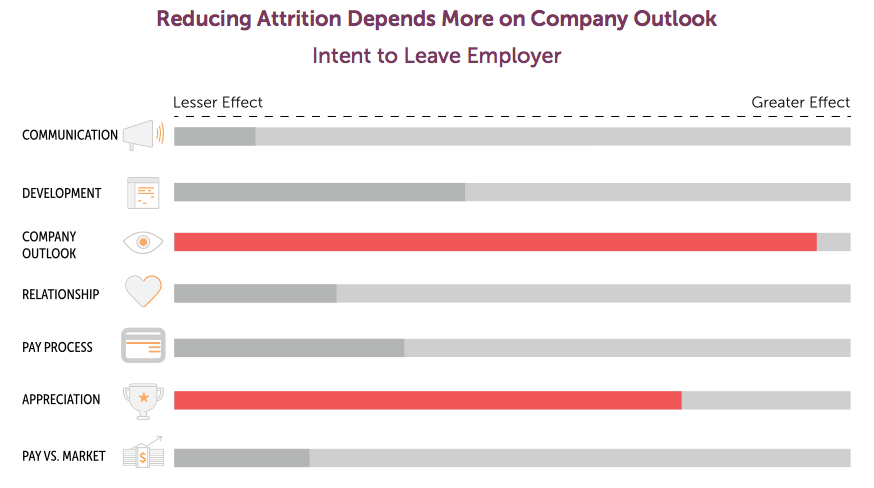 Company outlook is far and away the chief driver of intent to leave. An employee who strongly agreed that their company had a bright future is half as likely to plan on leaving in the next six months than a neutral employee. A worker who strongly disagreed with that statement, on the other hand, is 2.6 times more likely to leave as the neutral employee.

Employee development was the fifth most important variable for driving satisfaction, but comes in third for intent to leave, at 45 percent of the impact as compared to company outlook.

Pay process (36 percent) was next most important, followed by relationship with manager (25 percent) and pay vs. market (22 percent). For improving employee retention, frequent two-way communication was the least impactful variable at 13 percent relative to company outlook.

Want even more big findings from the study, plus specific action items for what you can do to improve employee engagement at your organization? Get the Employee Engagement report today!

What have you done to improve employee engagement at your company? We want to hear from you. Share your story in the comments.