What Is Pay Transparency & Why Does It Matter?

Negotiating your salary is never easy, but what makes it particularly difficult for a lot of people is the lack of pay transparency. Pay transparency is the approach employers take on communicating about compensation. The negotiation process can take on the feel of a poker game rather than an informed discussion on the value of a given role. But, if you walk out of a pay negotiation still wondering if you’re being compensated fairly, that’s not a win for anyone involved – not you and not your employer.

In fact, according to the PayScale Compensation Best Practices Report, “seeking higher pay elsewhere” was the top reason that most employees gave for leaving their company. However, PayScale also found in a recent report that most employees don’t actually know how they’re being paid relative to the market. And, if they guess wrong, they’re usually guessing they’re underpaid. What’s more, people who feel they are underpaid are 50 percent more likely to seek out new opportunities. So companies who don’t invest in pay transparency and instead guard information about employee compensation may lose their best people not because they’re underpaying necessarily, but because they didn’t have better communication around compensation.

What Pay Transparency Is and Is Not

Being more transparent about pay doesn’t have to mean posting everyone’s salary for all to see, though there are some companies that go that far. What it does mean is employees having an understanding of their company’s compensation philosophy, strategies and practices.

What labor market is the company competing in for talent? (In some cases, it may be more than one. For positions that are in high-demand, the company may decide to go up market to compete against bigger, local companies for talent.) Is the company aiming to meet or exceed the competition when it comes to pay? What compensation data sources does the company use to evaluate the market? What is the range for your position at your company and where do you fall within it? How are raises determined / awarded?

There are different levels of transparency and each company is going to fall somewhere along a spectrum, but pressure is definitely building for companies to become more transparent with employees about pay to a larger degree.

Just in the last year, we’ve seen an incredible amount of media coverage on pay transparency, from the Google employee who created a spreadsheet for Google workers to share their salaries to the Gravity Payments CEO who set the minimum salary at his company to $70,000/year. There was even a Twitter campaign, using the hashtag #TalkPay, encouraging people to openly share their current and former salaries.

However, although a level 5 in pay transparency creates a lot of media buzz, it is not the best solution for all companies. Most organizations target a 3 or a 4 in pay transparency, which means they do more to communicate pay practices to individual employees and train managers on understanding compensation, but they don’t go as far as to publish everyone’s salaries.

Why Does Pay Transparency Matter?

Beyond just making salary negotiations easier on everyone, pay transparency has some other major benefits as well for both employees and employers.

First, pay transparency can help ensure that workers are being paid equitably for equal work. In fact, research from PayScale shows that pay transparency closes the gender pay gap. If there are fewer secrets surrounding salaries, it becomes much harder for any pay inequities to arise. That’s better for workers in terms of fairness, and it protects employers from potential lawsuits. Even the U.S. government is moving toward better transparency. The Department of Labor recently ruled that federal contractors may not discriminate against workers who discuss pay. According to a press release, “Under the rule, federal contractors and subcontractors may not fire or discriminate against employees for discussing, disclosing, or inquiring about their own pay or that of their co-workers. The rule also protects pay discussions by job applicants.”

Second, pay transparency builds trust. When employees feel valued, and aren’t spending cycles thinking about whether they might be underpaid, they’re more likely to be more fully engaged in their work. We know from countless studies that a more engaged workforce leads to better business outcomes. And, when PayScale studied the link between pay and employee engagement, we found “that one of the top predictors of employee sentiment, including ‘satisfaction’ and ‘intent to leave,’ was a company’s ability to communicate clearly about compensation. In fact, open and honest discussion around pay was found to be more important than typical measures of employee engagement, such as career advancement opportunities, employer appreciation and future enthusiasm for the company.” 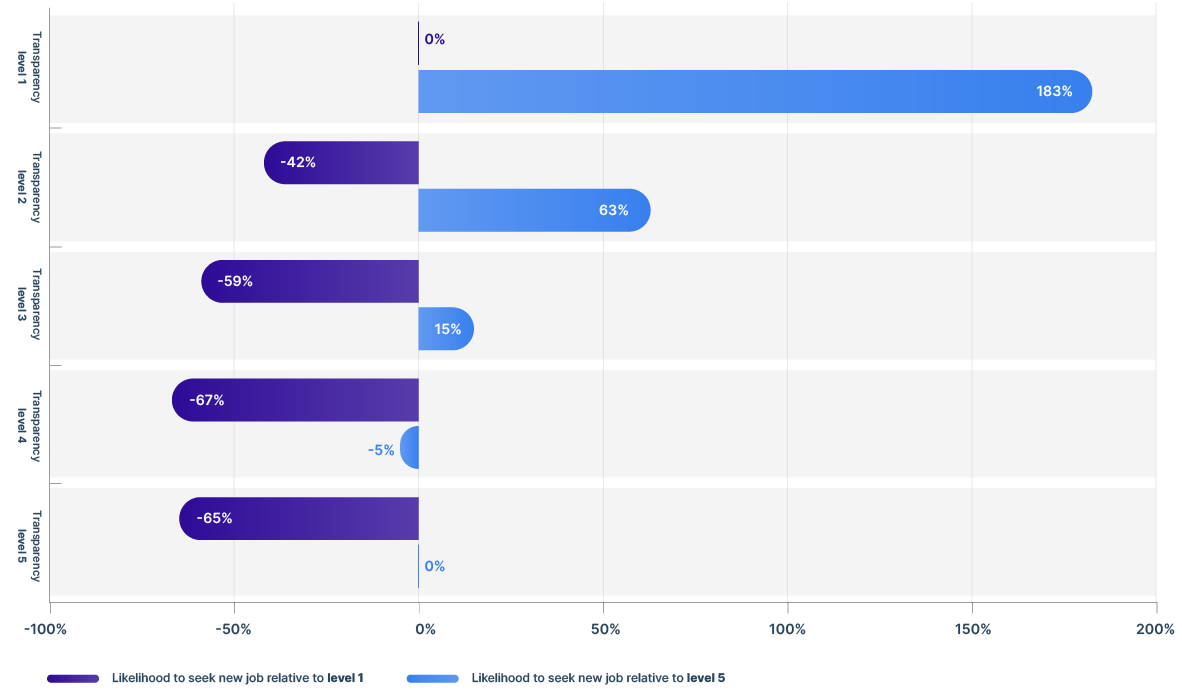 Therefore, companies that are truly committed to retaining and supporting their best employees are going to move in the direction of more transparency. Full transparency? Maybe not. But the standard best practice is going to shift from where it is today. It has to.

Topics: A Raise/Promotion, All, Salary for the First Time, Salary, but I’m Not Sure if I Should