Equal Opportunity in the Workplace: Their Problem, Not Ours 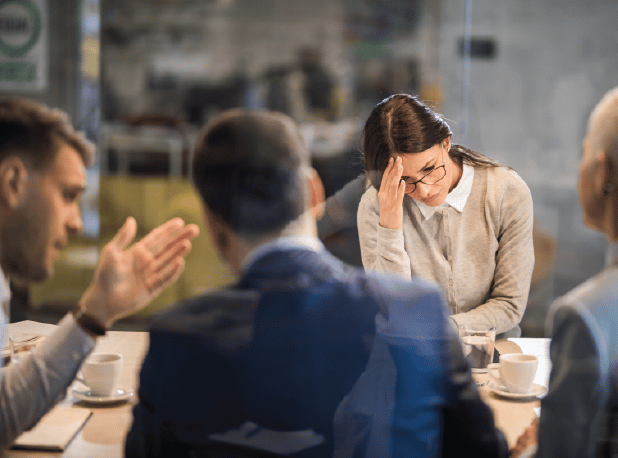 PayScale has studied the gender pay gap since 2015 and has found persistent differences in men’s and women’s pay. We have also documented that women, especially women of color, have much lower rates of climbing the corporate ladder than their male counterparts. Overall, we see that men and women do not have equal opportunity in the workplace.

In this study, we uncover two major differences in how gender equity is perceived in the workplace. First, people largely aren’t recognizing gender inequality issues in their own workplace, despite recognizing that men and women don’t have equal opportunities in general. In other words, respondents more frequently agreed that equal opportunities existed for men and women in their own workplace than in most workplaces.

Second, there is a large perception gap between men and women. Men agreed at considerably higher rates that men and women have equal opportunities in both their own workplace and in most workplaces. When we look at the data by race/ethnicity, this perception gap is even larger. Our data is particularly troubling considering that men, particularly white men, dominate the upper echelons of organizations. This one demographic group has much more opportunity to directly impact whether their workplace is truly free of gender-based discrimination, yet recognizes workplace discrimination less often.

While the conversation on pay equity has come a long way since our first gender pay gap report, this research suggests that there is still much work to be done. Simply asking employees if they think that women and men are treated equally at their organization is not enough. Organizations looking to create true equality for their employees need to holistically examine their compensation, promotion and retention practices.

We Can’t All Be Above Average

Between June and September 2019 over 27,000 respondents took PayScale’s salary survey and answered our workplace equity questions. These questions first asked if respondents felt men and women have equal opportunities in most workplaces and then asked them to assess opportunities in their own workplace. They also provided the industry they work in.

Our data suggests that when it comes to gender equality in the workplace, the cognitive bias known as “the above-average effect” is at play. The above-average effect is the widespread tendency for individuals to think of themselves as above average, even though there is only a 50/50 chance this is true. For example, most people rate themselves safe drivers, despite engaging in unsafe behaviors. 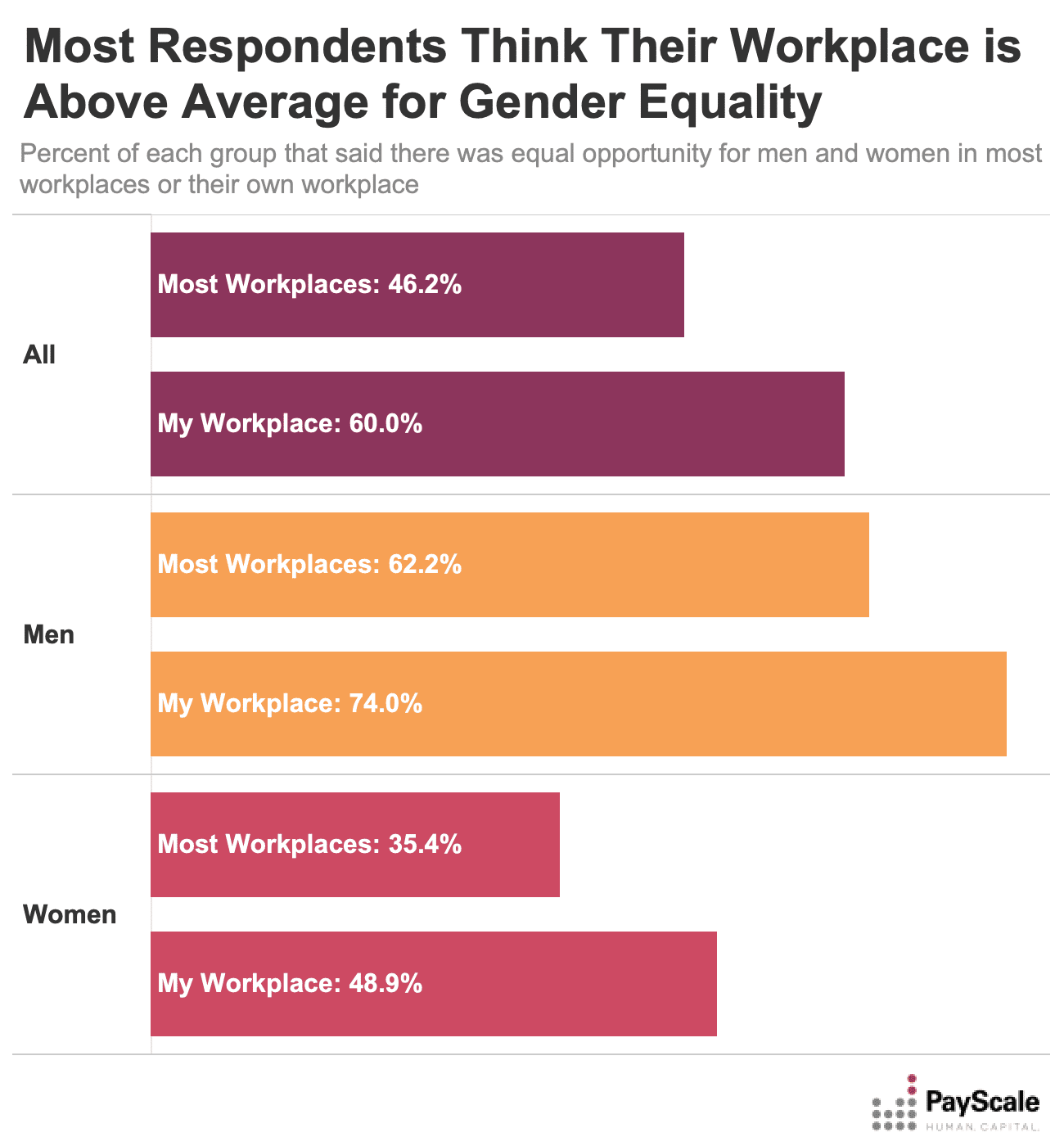 Applied to gender equity, the above average effect leads people to think their workplace is equitable even though they acknowledge that most workplaces are not. Overall, 60 percent of all respondents said that they either strongly agree or agree with the statement, “In my workplace, men and women have equal opportunities.” However, only 46 percent strongly agreed or agreed with the statement, “In most workplaces, men and women have equal opportunities.”

We observed this trend across race, gender and industry.

Organizations can’t fix problems that they don’t recognize. These responses demonstrate that employers cannot rely on employee-sentiment surveys when assessing gender equality. Instead, they should analyze their compensation practices to identify pay gaps. They should also look at promotion velocity to assess if opportunity is equal within their organization. In other words, not perceiving a problem doesn’t mean there isn’t a problem. Organizations need to be aware of the possibility of inequality, while proactively taking steps to evaluate and remedy such inequities.

…In your own workplace 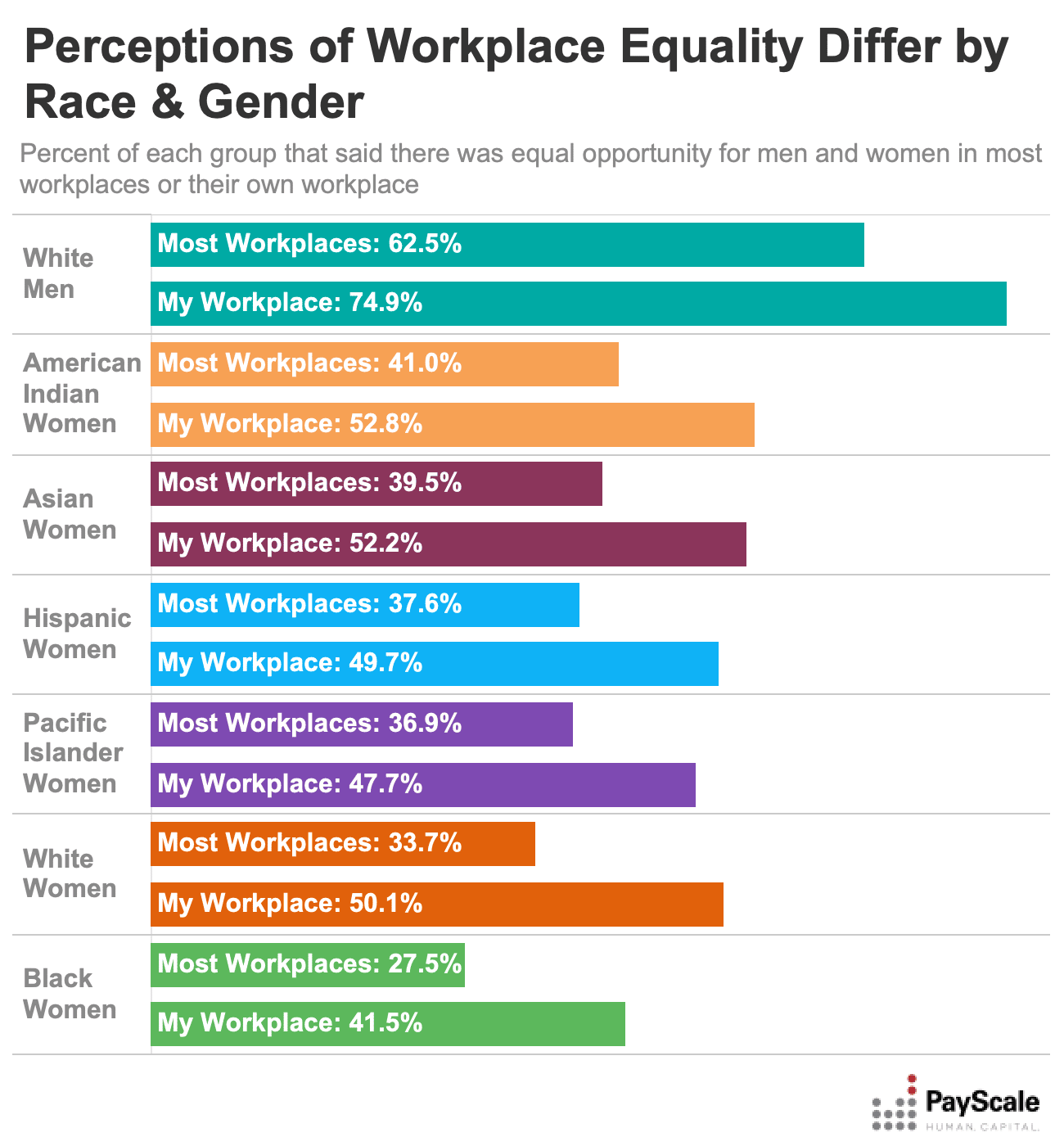 In addition to varying by race/ethnicity, the perception gap between men and women also varies by industry. It is largest for male-dominated industries. The largest gap is 34 points among energy and utilities workers. Gaps in construction and engineering and science are 33 and 31 points, respectively. 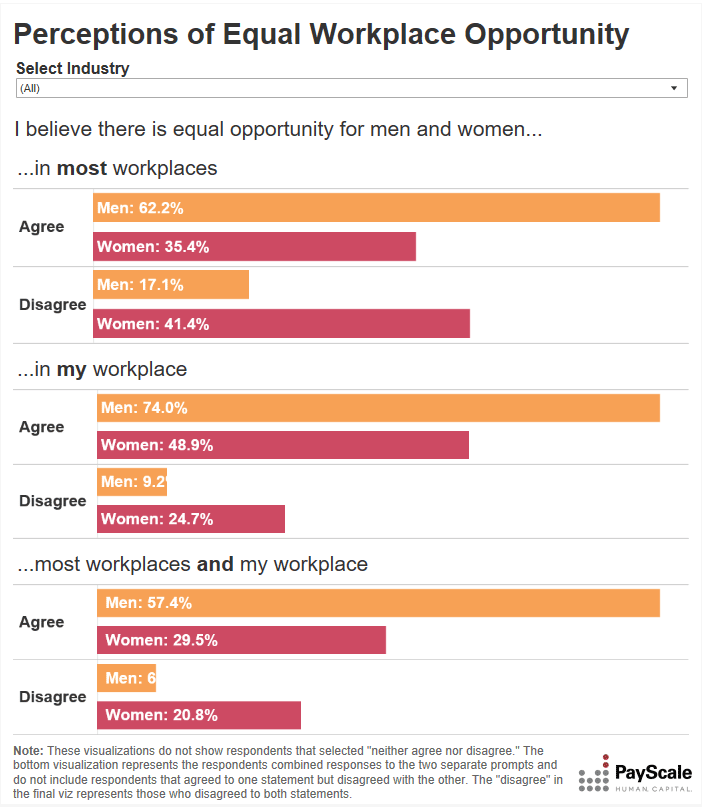 Large perception gaps likely represent that men in these fields buy into the idea that their industries are meritocracies where the best ideas and best workers win. Women in these industries, however, probably feel differently.

These findings are particularly troubling given differential treatment and unfairness are major drivers of women leaving prestigious, high-paying industries such as engineering and tech.

The overall perception gap increases to 27 percentage points when examining responses to whether  most workplaces have equal opportunities. Sixty-two percent of men agreed, compared to only 35 percent of women. 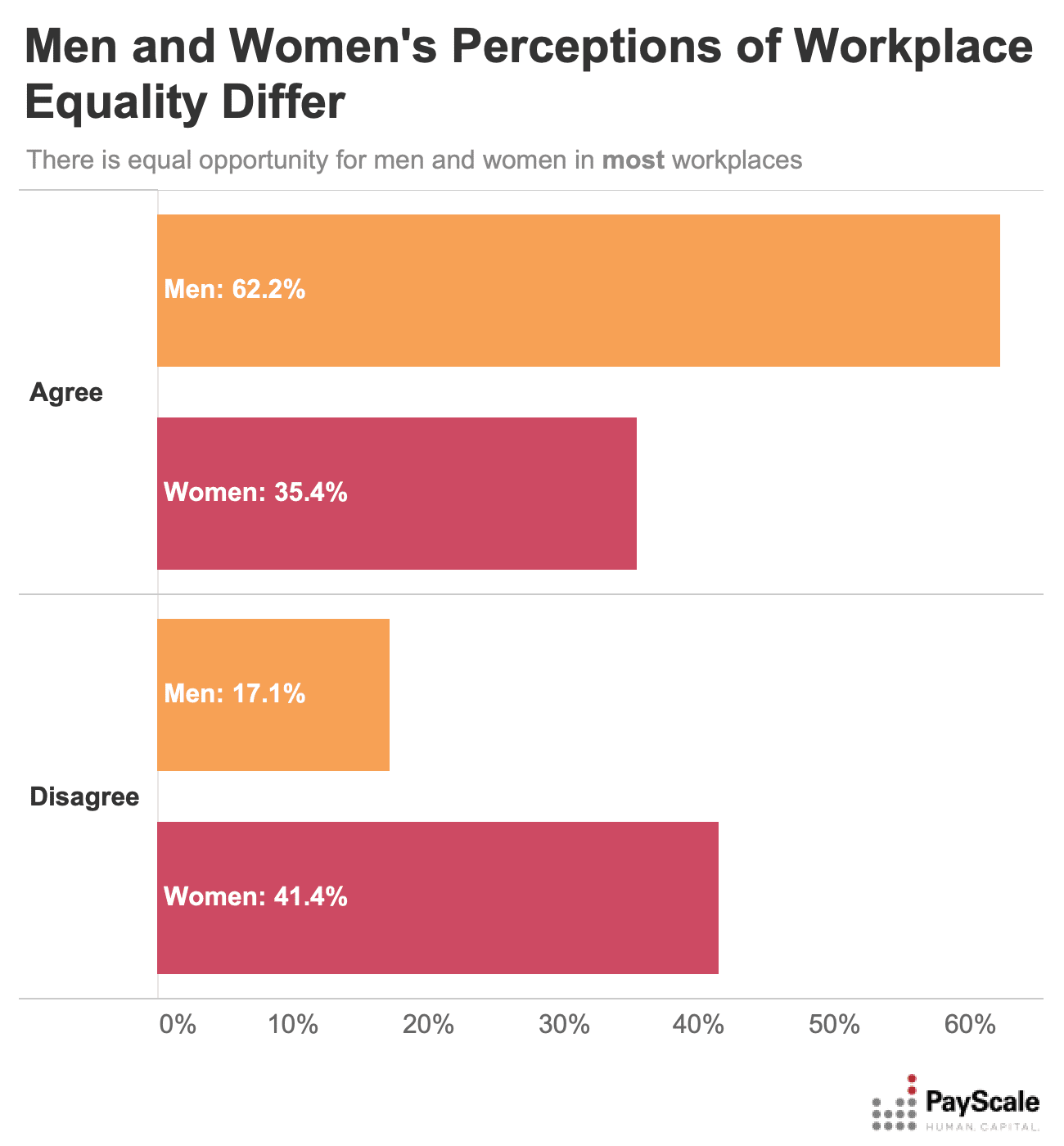 Again, the perception gap grows when breaking out respondents into racial/ethnic groups and is largest when we compare the responses of white men with those of black or African American women. Sixty-three percent of white men responded that equal opportunity for men and women exists in most workplaces, compared to only 28 percent of black or African American women. This yields a 35 point perception gap.

In every breakout of respondents, whether it is by race/ethnicity or industry, the perception gap exists. In every single case, men tend to believe in equal opportunity more than women do. Such a consistent trend in the data shows that the struggle for gender equality in the workplace continues, whether seen or unseen. How can conversations on workplace inequality be introduced in an organization, if most men believe that opportunity is already equal?

A Side-by-Side Analysis of Equal opportunity

Broken out between men and women, men agreed with both statements 57 percent of the time, compared to women’s 30 percent. 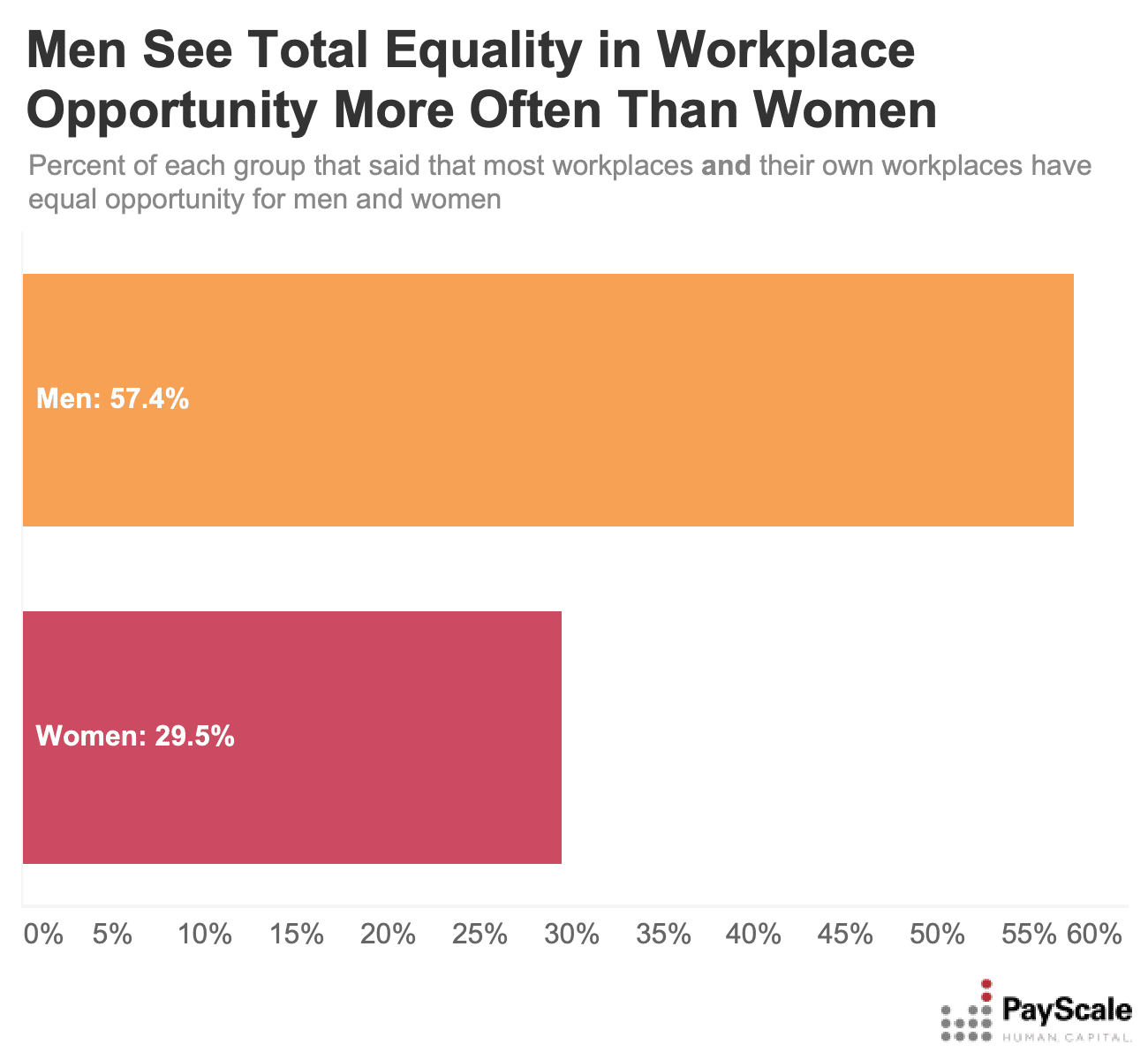 In opposition, only 6 percent of men disagreed with both statements, compared to 21 percent of women. This clearly displays men’s tendency to believe that opportunities are equally available, while women are more divided. 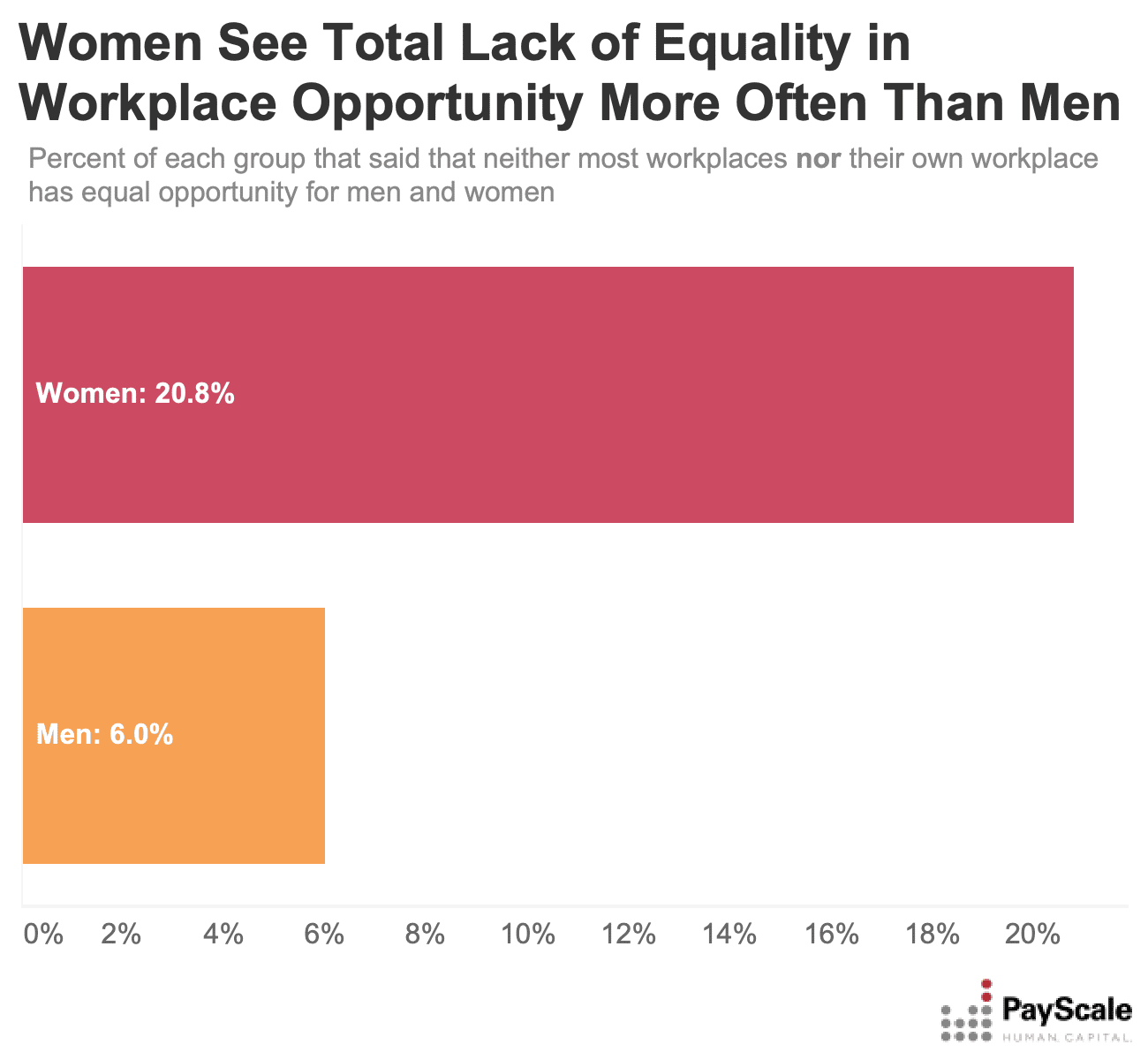 We saw the same trend in every industry. This difference was highest in the construction industry, where 36 percent more men than women agreed with both prompts. Construction is also the industry where women had the lowest belief in equal opportunity, with 31 percent of women saying that equality is not present in their workplace or most workplaces.

This research highlights the urgent need for data to be included in conversations about workplace equity. Relying on perceptions of equity is insufficient, as we can clearly see these perceptions suffer from the above-average effect and vary greatly across demographic groups. Analyzing pay gaps, differences in promotion velocity and who is leaving would give organizations a more accurate picture of whether men and women are given equal opportunities.

Given the high percentage of white men in leadership roles, adopting data-driven strategies utilizing  statistical analysis and pay transparency are crucial to eliminating biases. Transparent pay practices directly support an organization’s ability to recognize inequalities in the workplace. They also help to instill trust and pay satisfaction among employees. A transparent and proactive approach to assessing inequity and fair pay in the workplace will help secure an organization’s commitment to a bias-free compensation strategy.

The findings supported in this data reveal how unreliable perception is when it comes to inequality in the workplace, particularly perceptions of white men and men overall. This is not a problem that can be easily solved, nor is this a problem that is easy to observe day to day. Usually, professionals are good at being professional, and people’s intentions are often in the right place. Good intentions, however, are not good enough. If there is to be one source of truth within any organization’s pay and equity practices, it should be that equitable outcomes must take precedence over good intentions. The best way to achieve equitable outcomes is to proactively create them.

Between June 1, 2019 and September 1, 2019 over 27,000 respondents took the PayScale survey and answered if they felt men and women have equal opportunities. They also answered questions regarding their gender, race and the industry they work in.

Gender: Respondents could choose one of the following. If they selected “Prefer to self-define” they could do so in an open-response box.

Race/ethnicity: Respondents could choose one or more of the following and could opt to self-identify in an open-response box.

Only respondents who chose exactly one of the above were included.