Raising the federal minimum wage is a controversial topic. Economists have been arguing about the efficacy and impact of the minimum wage since it was first introduced in the United States in 1938.

Since around 2012, there has been increasing conversation about raising the federal minimum wage to $15 an hour in the United States by 2025. The Raise the Wage Act was reintroduced to Congress in 2019. A federal minimum wage increase was added as a provision to COVID relief legislation in 2021 but did not pass in the Senate. However, the issue of raising the minimum wage has not been resolved. The bill was brought up again in President Biden’s address to Congress in April 2021 following his first 100 days in office.

We can expect to hear more about the need for a federal minimum wage increase in 2021.

Let’s look at why a federal minimum wage increase to $15 an hour makes sense as well as the predicted impact such legislation would have on employers, workers, and the economy. 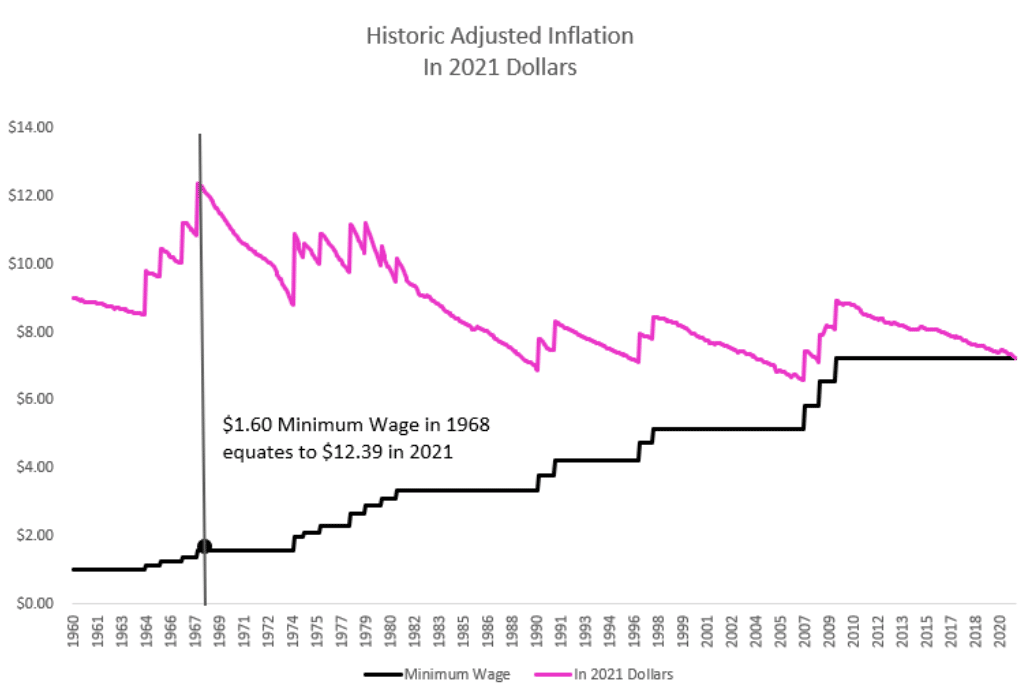 Increasing the federal minimum wage automatically every year to keep up with inflation circumvents this problem. This is proposed in the Raise the Wage Act, which would have raised the minimum wage to $9.50 in 2021 with incremental increases to reach $15 by 2025, after which the legislation proposes to index the minimum wage to median wages. Of course, it should be noted that median wage growth has also flatlined over the last decade. 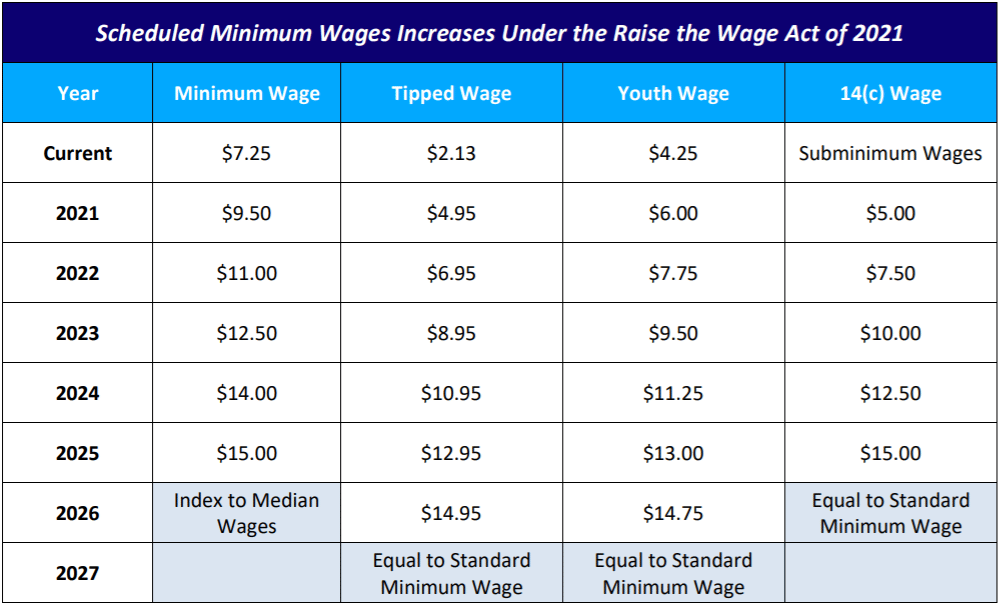 2. Why is $15 an hour the proposed federal minimum wage increase?

The Fight for $15 began in 2012 as an American political movement to essentially double the minimum wage. The movement is tied to labor strikes and calls for unionization. The platform calls attention to the demographics of minimum wage workers, which — contrary to popular belief — are not primarily high school students earning spending money. Rather, the majority of minimum wage workers are adults with families who cannot make a living on minimum wage and must work multiple jobs as well as obtains forms of government assistance such as food stamps to survive.

The Fight for $15 movement is tied to the steady evaporation of factory jobs, agricultural jobs, telephone operator jobs, construction jobs and other occupations that have been shipped overseas, overtaken by automation and machine labor, or underfunded by lack of investment in infrastructure.

A key inflection point for lost jobs to automation was in 1987. Before this time, job displacement by machines was met with equal or greater reinstatement in different areas of labor. However, a study out of MIT found that from 1987 to 2016, the displacement of jobs displacement was 16 percent while reinstatement was only 10 percent. This is getting worse. By 2030, 30 million U.S. jobs could be eliminated.

In response, displaced workers have been forced to take service jobs in retail, restaurants, hospitality, healthcare, childcare, and so on. Many of these jobs were commonly taken on by teenagers and people seeking only part-time work in the past. The wages offered by these positions is often not a living wage, but people are being forced to bring up families on these wages. In addition, working conditions are often stressful, and sometimes even dehumanizing. 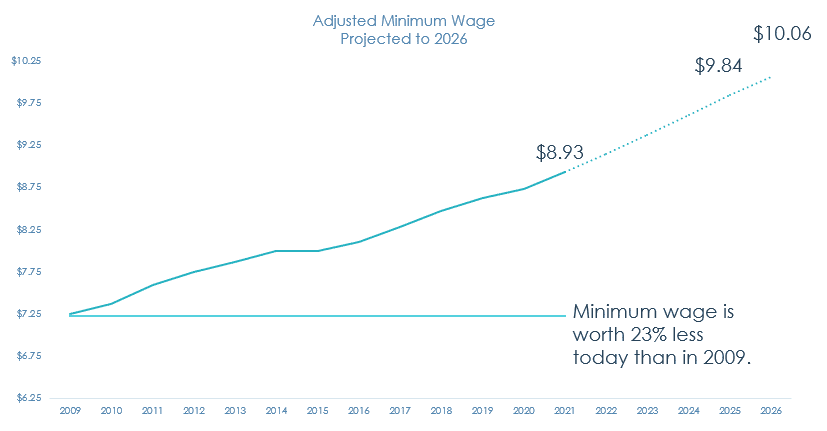 Notably, the March on Washington in 1963 called for a $2 minimum wage. This movement was a precursor to the Equal Pay Act and Civil Rights legislation. It was a peaceful protest that culminated with the famous “I Have a Dream” speech by Dr. Martin Luther King. But it was called the March on Washington for Jobs and Freedom and raising the minimum wage was part of the platform. The minimum wage was raised to $1.25 in 1964, falling short of hopes. If that $2 had been achieved in 1963, inflation today would bring that amount to around $15. 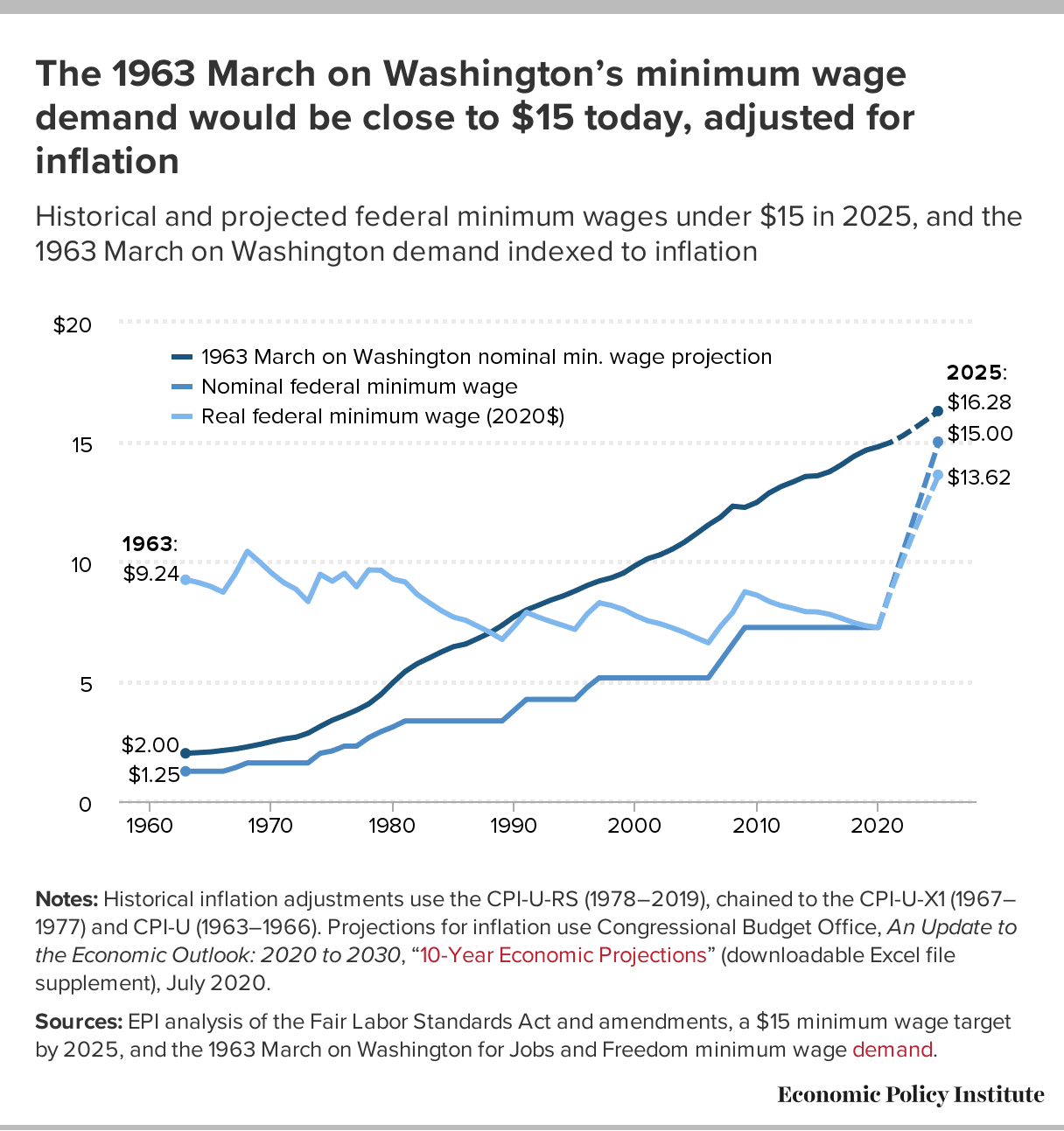 If this seems extreme, keep in mind that productivity has doubled in the last 50 years while median wages have stagnated, and the value of minimum wage has declined. Productivity is a measure of how much corporations earn against the labor they employ.  In the United States, it looks something like this:

If you add wages for the top one percent of earners or the increase in average CEO pay, the gaps illustrating income inequality become even more extreme. According to the EPI in 2019, CEO pay has grown 940 percent since 1978 while worker pay has risen only 12 percent. In 2020, the EPI announced that CEO pay grew by another 19 percent, resulting in CEOs now making 320 times the wages of the average worker. Even in 2020, CEOs are continuing to get multi-million dollar bonuses despite the pandemic, in some cases even using predictive revenue numbers instead of actual revenue numbers to qualify for these bonuses, while at the same time cutting wages for employees, freezing wage increases for employees, or furloughing employees without pay. 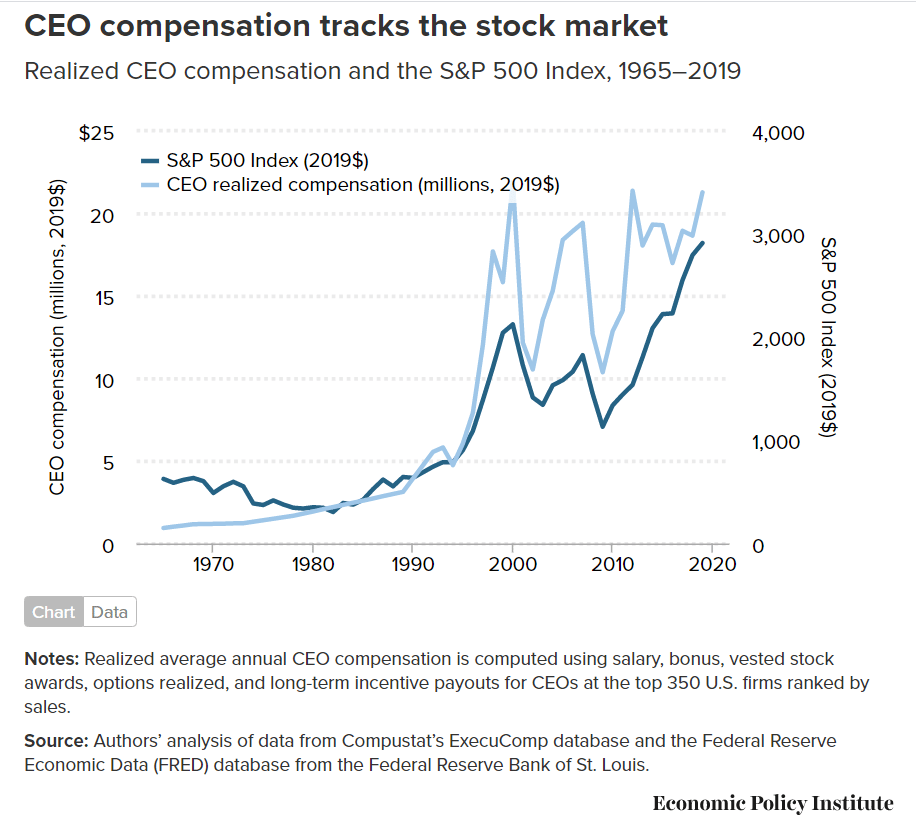 Legislation to Raise the Wage to $15 proposes to reduce income inequality by forcing employers to pay the bottom rung of workers more, thereby tightening this gap, since it is not happening organically. Theoretically, putting more money into the hands of people who will spend it would also stimulate economic growth. However, there are some adverse consequences to some types of businesses when the federal minimum wage is increased, and economists disagree on the impact of increasing the minimum wage holistically.

3. Where a $15 minimum wage has been implemented already

Payscale tracks the minimum wage in our compensation management software, which customers can access. 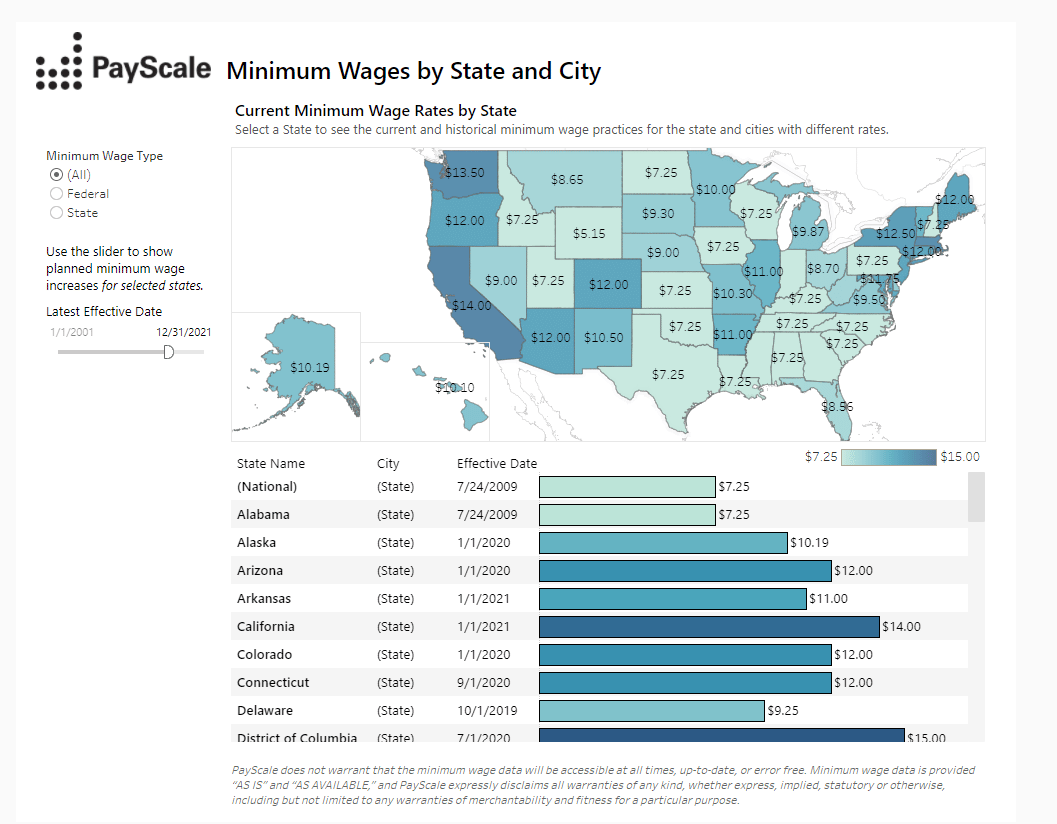 4. How employers should prepare for minimum wage increases

Organizations with minimum wage workers spread throughout the United States also have to grapple with the disparity in pay for employees working the same jobs in different locations. This can be particularly challenging for organizations operating near city or state borders where the minimum wage is significantly different within a commutable distance. This situation can also be impacted by the rise of remote work for certain kinds of hourly jobs that can be performed remotely.

Compensation managers know that they must abide by local minimum wage laws when setting pay for workers. By and large, employers want to pay workers fairly. They want to retain employees. They want to decrease costs associated with turnover. They also want their workers to be engaged and have a positive outlook when it comes to their jobs and the organization.

However, employers also need to worry about competitive wages. A lower minimum wage allows organizations to have a higher average wage that is competitive to the going market rate and thus differentiated from the competition. Some organizations may have the legal minimum wage as the organization’s minimum on the books, but not typically hire at that rate. They may set wages for unskilled, entry-level hourly employees at more than the legal minimum to attract and retain talent. When the minimum wage increases, employers lose this competitive differentiation. Worse, when the minimum wage increases by a lot, they might find themselves in a situation where employees with more skills, tenure, or responsibilities who were being paid at higher rates now make the same as everybody on the lowest rung.

This is sometimes known as The Ripple Effect.

The Ripple Effect means that more people will receive an increase in wages than just employees making minimum wage. From the perspective of the employee, and possibly the economy, this is good news. But for the employer, a drastic increase to the payroll budget can be challenging to manage.

Depending on the severity of the increase, this can be difficult or even impossible for a business to manage quickly and fairly. Organizations that are not prepared to make these increases are likely to see turnover as their most valuable workers seek other opportunities where they can be compensated more for their skills, responsibilities, and experience. If employees don’t leave, it could even create a pay equity issue, which could land the organization in hot water if it is subject to a pay equity audit where the pay of workers cannot be justified according to the differentials, especially if there are racial or gender pay gaps.

The only way to avoid these problems is to get ahead of them.

It has been twelve years since the federal minimum wage has been increased. It has been nine years since the Fight for $15 movement began. Smart organizations will have seen the writing on the wall and have been managing pay increases proactively, strategically, and incrementally. For them, a sudden hike in the minimum wage won’t come as a surprise; they will already be ahead of it. Organizations who have not been thinking about compensation strategically need to start doing so immediately.

If your organization doesn’t have a dedicated compensation team, it might be time to build one or start working with a compensation consultant. Compensation specialists can help you model scenarios for how pay increases will affect your organization and come up with a plan to get ahead of legislation. Even if legislation isn’t on the immediate horizon, other organizations will set the standard for what lower-skilled workers can expect to be paid. Costco, Target, and Amazon all pay a $15 minimum wage already. Other organizations like Starbucks have plans to raise their minimum wage to at least $15 an hour over the next few years.

Employers need to understand the economic implications of minimum wage increases and start planning for different scenarios. This means looking at what a federal minimum wage increase to $15 an hour by 2025 will require from the business to remain both compliant and competitive. Even if it doesn’t happen, the exercise will be educational and help you to respond proactively to changes in the market.

Economists disagree about the impact of minimum wage increases, but that doesn’t mean you can just ignore the debate. The federal minimum wage is overdue for an increase of some kind and increases are happening at the state, city, and business level. To avoid being caught flat footed, every organization should be looking at how they would manage an increase of the minimum wage to $15 an hour if the Raise the Wage Act is passed in Congress — or more, if it comes to it.

An increase to the minimum wage might mean less budget to increase pay for top earners, decreased profits, scaled down hours, offloading labor in favor of technology, increased prices, or even exiting the market. However, it also might mean increased productivity from happier workers providing better services, increased spending in the local economy resulting in more custom, and reduced expenses related to turnover.  There are case studies that demonstrate positive outcomes from increasing the minimum wage, even for small business, even in a pandemic. The difference can hinge on margins and how well the business was doing before.

To that end, the game is won in the strategy. If a business has been coasting for the last decade on the assumption that the minimum wage will not increase, it’s past time to start examining the impact if it does. For businesses that have been expecting it, there’s no reason not to get ahead.

Whether your business flails or thrives when the minimum wage increases may depend on the strategic decisions that you make now.

Interested in learning more about the impact of minimum wage increases on employers and pay equity? Payscale is hosting a webinar with a panel of subject matter experts representing economic research, employment law, and compensation management. Register to watch the event live on Friday, May 14, 2021 at 11:00AM PST or download the recording afterward.