The Price of Doing Good: Measuring the Nonprofit Pay Cut

Underpaid and overworked has become the norm for nonprofit workers today. A movement to increase wages for front line employees in this sector is picking up steam, but faces an uphill battle. It is often assumed that these workers experience so much personal fulfillment due the nature of their work that they willingly accept lower compensation. Many studies have shown that workers are willing to make this trade, but just how much is that fulfillment worth?

Using data collected through the PayScale salary survey, we examined the value of nonprofit work and a meaningful mission across a range of jobs. We discovered that while it certainly is true that nonprofit work comes with a pay cut, the most meaningful jobs don’t necessarily have the lowest pay.

Can Meaningful Work Make Up for Lower Pay?

To compare nonprofit and for-profit workers, we focused on directly comparable job titles. We looked at eight distinct positions commonly found in both the for-profit and nonprofit sectors.

We also asked these workers whether they thought their job made the world a better place. They could respond in one of five ways: 1) Very much so, 2) yes, 3) a little, 4) no, or 5) my job makes the world a worse place. To understand if they felt their jobs were meaningful, we calculated how likely a nonprofit worker was to respond “Yes” or “Very much so” to this question relative to for-profit workers with the same job (see Methodology for more details). We call this the “High Meaning” ratio.

Our analysis indicated that the “nonprofit discount” is dependent on job title, but it is significant. For seven of the eight titles we examined, nonprofit workers earned between 4 percent and 8 percent less than their counterparts at for-profit companies. Marketing managers were the outlier: those at nonprofits earn nearly 18 percent less. 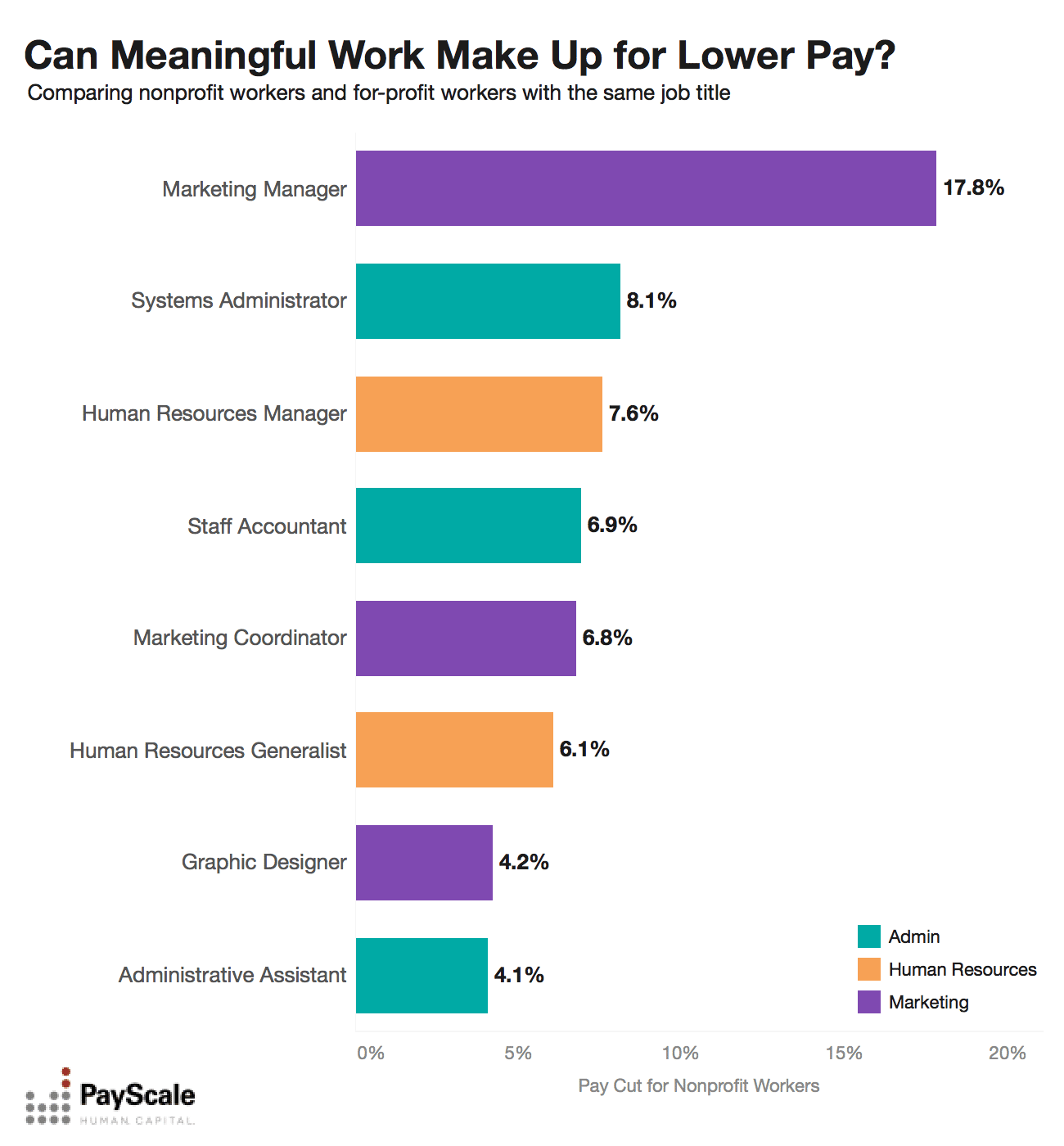 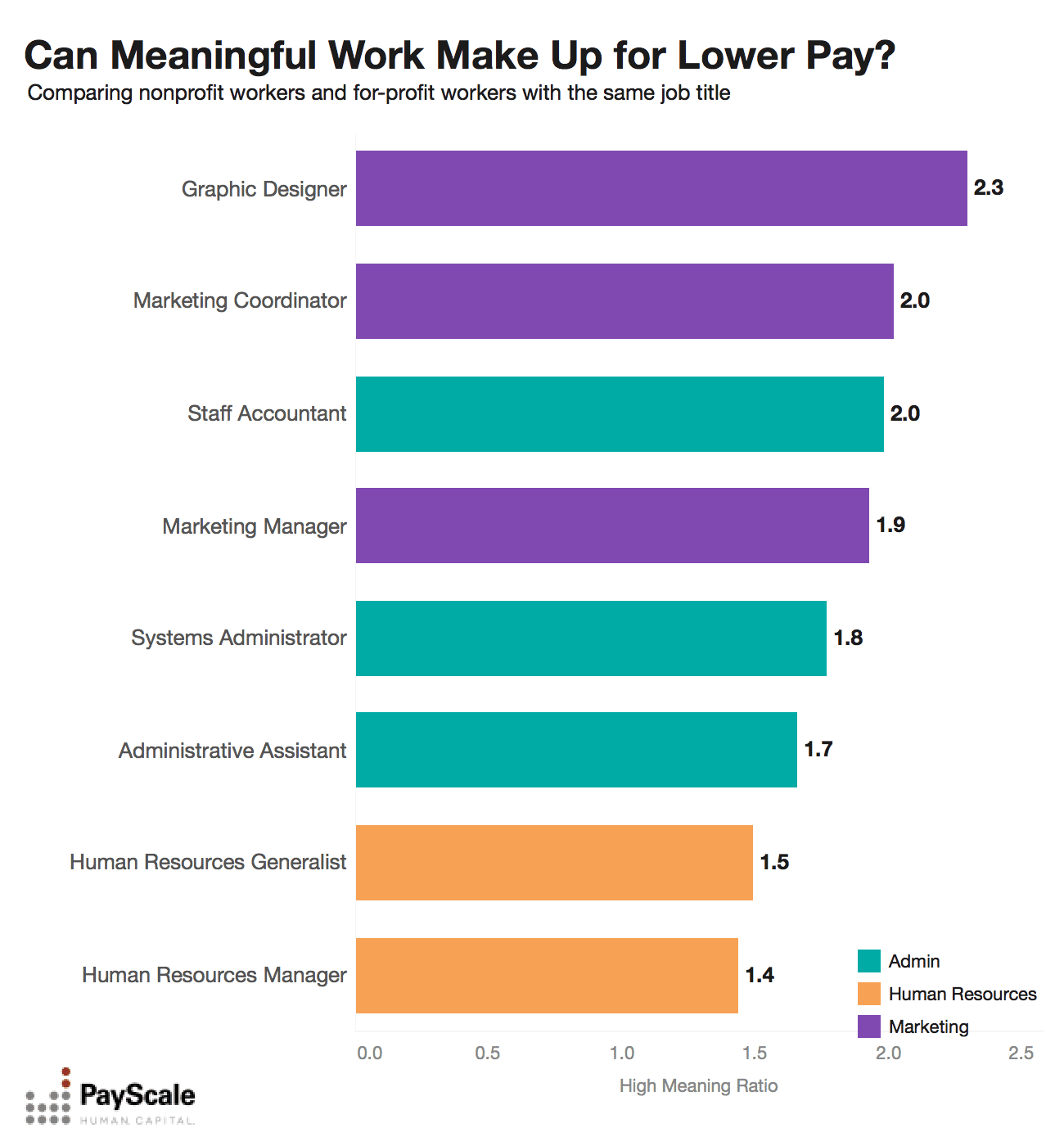 All eight job titles have High Meaning ratios over 1.0, supporting the narrative that nonprofit work feels more fulfilling. However, we immediately see that higher meaning doesn’t necessarily result in a bigger nonprofit discount. At 2.3, graphic designers are more than twice as likely to say that their job makes the world a better place. Graphic designers also reported the second-lowest pay cut (4.2 percent). Meanwhile, marketing managers, with their whopping 17.8 percent “nonprofit discount,” have a middling ratio for High Meaning. A ratio of 1.9 represents a noticeable increase in meaning for nonprofit marketing managers over their for-profit counterparts, but doesn’t stand out in this analysis. With only 6 job titles we cannot definitively rule out a relationship between meaning and pay, but we see no indications of such a relationship in this analysis.

A job is defined by more than just title. There are many other factors that could be affecting both meaning and pay including required skills and workload. But there are two relationships present in our data that shed light on the lack of correlation between meaning and pay. The first is seniority and pay, and the second is department and meaning.

The more senior jobs in our analysis (marketing managers, HR managers, and marketing coordinators) all reported pay cuts exceeding 6 percent. One explanation here would be survivorship bias. Since nonprofit work is known to have low pay and long hours, those who stay in the field are likely the most dedicated workers. Furthermore, workers in the nonprofit sector are paid less than those at for-profit companies, that difference likely compounds over the span of their careers. As a result, senior workers leaving companies to join nonprofits are more likely to see substantial pay cuts. In order for that cut to be “worth it” for the worker, there must be another source of motivation and value creation. The organization’s mission, and the potential to have a positive impact on the world, may be those motivating factors.

Additionally, we can see that related jobs show similar levels of meaning. HR managers’ and HR generalists’ ratios are barely different, as do marketing managers’ and marketing coordinators’. When examining high job meaning, the HR titles are at the bottom of our list, but the marketing titles are closer to the top along with graphic designers. One explanation might be that HR jobs are more meaningful across the board, which would result in a lower ratio between for-profit and nonprofit HR pros. It is also possible that the roles with higher meaning ratios require a level of specialization in the nonprofit sector. We would need further analysis before making any concrete conclusions.

A Small but Critical Advantage for Nonprofits

Our estimates of pay differences and job meaning ratings strongly suggest that workers are willing to be paid less to work for an organization they believe in. Of course, these eight jobs do not represent the entire labor market, and in some major metro areas highly competitive talent markets drive up wages for certain jobs. In these areas, in-demand workers such as engineers may find nonprofit jobs whose pay meet or exceed the market rate. That said, we observed a consistent pay disparity in this analysis. As such, we can confidently say that some workers want to make the world a better place, even if it costs them.

Does this mean that nonprofit organizations should try to pay everyone 5 percent less? No. Wages determined by market rates and will depend not only on job title, but a host of other factors including location, required educations and skills. But cash strapped nonprofits don’t need to worry about giving up their employee discount, and nonprofit workers can rest easy knowing that making world a better place doesn’t have to mean an empty wallet.

Editor’s note: Tim Wolock provided statistical analysis and made other contributions to this piece.

To estimate the effect of working for a nonprofit, for each of the eight job titles we ran an OLS regression of the natural log of pay on:

We exponentiated and subtracted 1.0 from the regression coefficients to convert them to percent changes.

In each regression, the coefficient on working for a nonprofit was significant at an alpha level of 0.001.

In addition to asking about pay and compensable factors, we also asked survey respondents “Does your work make the world a better place?” The answer options were:

For-profit worker – A “for-profit” worker is anyone who selected “company” as their employer type.

Nonprofit worker – A “nonprofit” worker is anyone who indicated that their employer was a “nonprofit organization.” Those who selected “Hospital” or “University” are not included in this analysis.

Pay – Our measure of pay is Total Cash Compensation (TCC). TCC combines base annual salary or hourly wage, bonuses, profit sharing, tips, commissions, and other forms of cash earnings, as applicable. It does not include equity (stock) compensation, cash value of retirement benefits, or value of other non-cash benefits (e.g., healthcare).