You’re finishing up your last college classes before you set off into the world. You’ve rented your cap and gown and planned a last hurrah with your closest friends. Soon, you’ll sit in an auditorium filled with your peers and their families as some stranger preaches the awesome potential of your uncertain futures and what your education will afford you.

The days of not having any real bills to pay are over. In addition to rent, utilities, and feeding yourself, you now have student loan payments to make. The companies where you did your summer internships aren’t hiring; in fact, they’re firing. No one else is even responding to your applications.

Nobody wishes they graduated college during a recession, but things were particularly bleak for the class of 2008. After months of rejection or silence from prospective employers, many faced a tough decision: keep sending resumes into the void, settle for a low-paying job or give up searching altogether.

For those who chose the job market, even a decade later the specter of the Great Recession looms over them. Economic research looking at those who graduated during previous downturns shows that graduating in a bad economy affects earnings in ways that are “large, negative and persistent.” However, our new research shows that things might not be so bad for those who entered the labor force during the Great Recession. In fact, their typical earnings are currently outpacing those who graduated before 2008.

To uncover if there is a “Great Recession penalty” we looked at total cash compensation in the PayScale dataset for those with a bachelor’s degree but no higher degrees. We grouped observations into graduation year cohorts, and compared how their pay fluctuated in the years after they graduated. For example, we compare the earnings of 2004-2005 graduates four years out of college with the earnings of the Great Recession cohort (those who graduated in 2008-2009) four years after graduation. This comparison reduces the effects of age and experience, allowing us to directly compare the earnings of different graduating classes. All figures are in 2017 dollars to further enable this direct comparison across time.

For this analysis, we used the same dataset that we used to calculate College ROI, which uses data collected between 2008 and 2018. As a result, we pick up a few years after graduation for the 2004-2005 and 2006-2007 cohorts. Although a couple of pieces are missing from our puzzle, the earnings curves still show a distinct pattern. 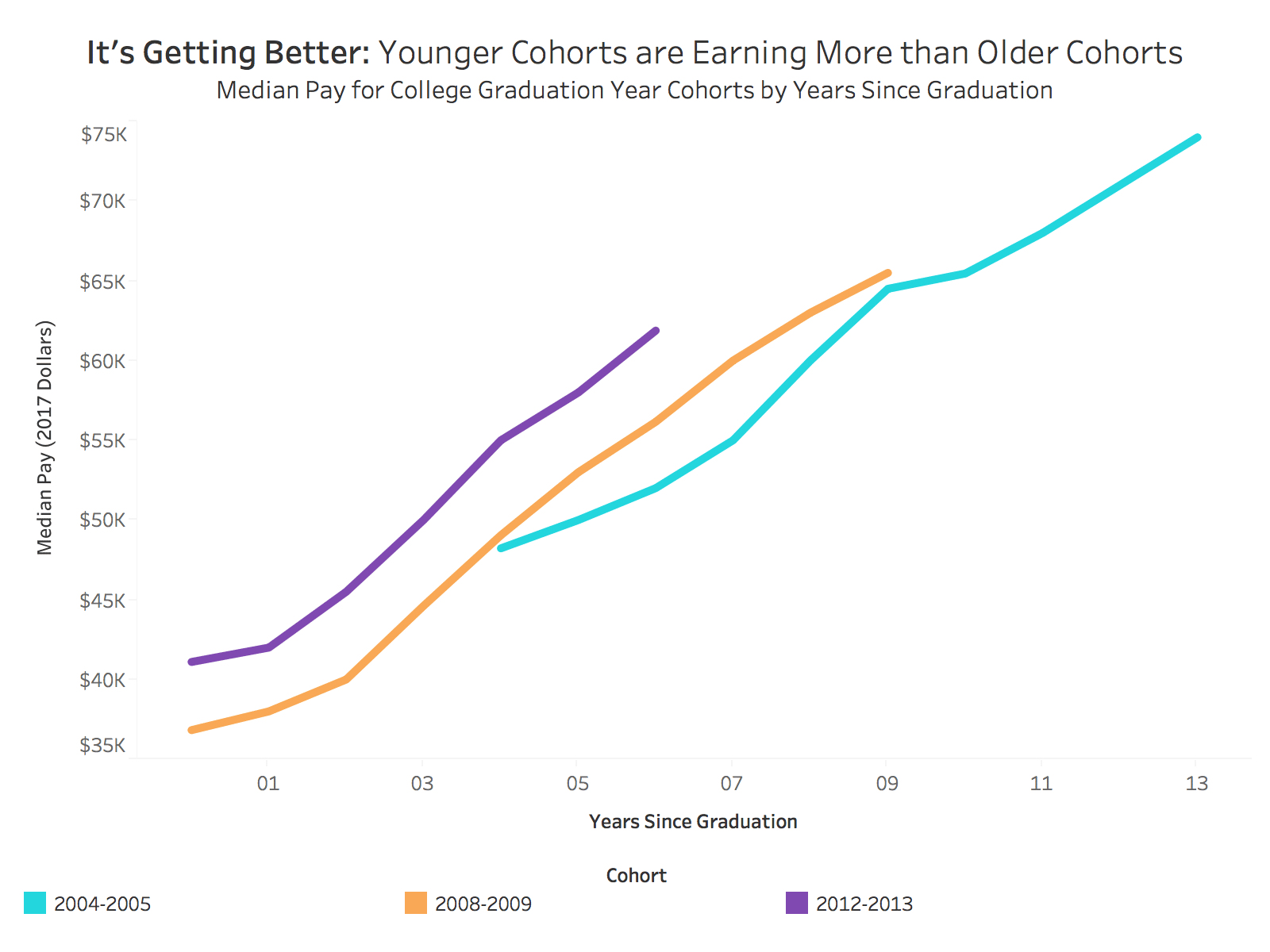 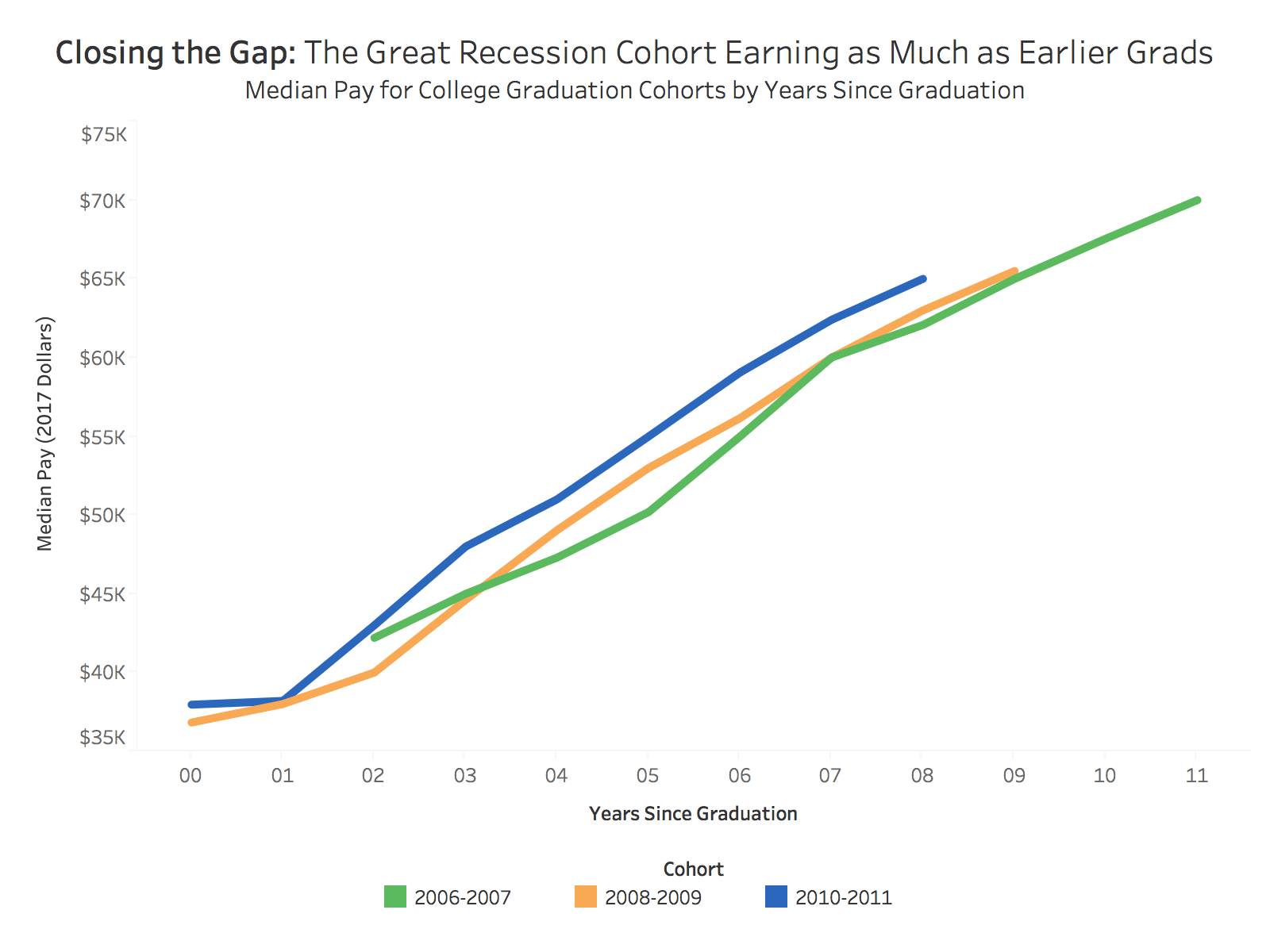 But despite a slow start, the 2010-2011 cohort followed the historical trend of out-earning previous cohorts by a significant margin by the time they were two years out of school. This shows that the Great Recession did not end the trend of each cohort making more than the previous one, but merely interrupted it.

What can you do if you do if you graduated in 2008 and the ghost of your first job is haunting you? Start by finding out what you are worth. The misfortune of graduating as financial markets tumbled does not diminish the value of your skills and experience. If your pay is not in-line with the market, ask for a raise. You may even want to consider looking for a different job. Depending on your occupation, job hopping can lead to a large pay bump.

When it comes to finance, there are plenty of unsettling trends to spook Millennials. But the specter of the Great Recession need not be one of them.